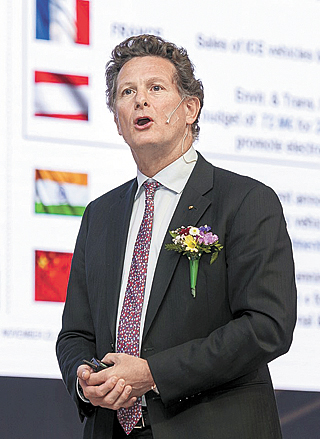 DAEGU - Gilles Normand, Renault Group’s senior vice president in charge of electric vehicle development, called on the government to provide financial and policy support to boost the use of electric vehicles in Korea at an auto show here on Thursday.

“It is important to have continuous support and financial assistance from the government, especially for battery replacement,” Normand said during a press event at the Daegu International Future Auto Expo. “But also nonfinancial support is necessary such as [electric taxis] being able to use bus-only lanes in non-commuting times, which is working in a number of countries.”

Renault Samsung Motors, the Korean affiliate of the French auto giant, has been selling its electric midsize sedan, the SM3 ZE, to taxi drivers in Seoul, Daegu and Jeju since last year. There are currently 235 SM3 ZEs running in the three cities.

“Based on the feedback of taxi drivers using the SM3 ZE, we believe having electric taxis use bus-only lanes, even if it’s only for select time periods, will significantly increase the use of electric taxis in Korea, which will eventually contribute to reducing gas emissions,” said Kim Jin-ho, a director who oversees the electric vehicle division at Renault Samsung Motors.

Aside from the SM3 ZE, it has the Twizy, a two-seat electric car that can go 80 kilometers (50 miles) on a single charge.

“This is a C-segment midsize sedan that is able to hold up to five passengers,” Kim said. “Most of the electric models available in Korea right now fall in the lower segment. For this reason, we think the new SM3 ZE is suitable for the taxi and car-sharing markets.”

The Daegu International Future Auto Expo, currently in its first year, runs through Sunday at Daegu Exco and includes 198 companies from 18 countries.

Tesla is participating in its first auto show here since entering the Korean market last year and has set up a booth displaying two Model S cars.