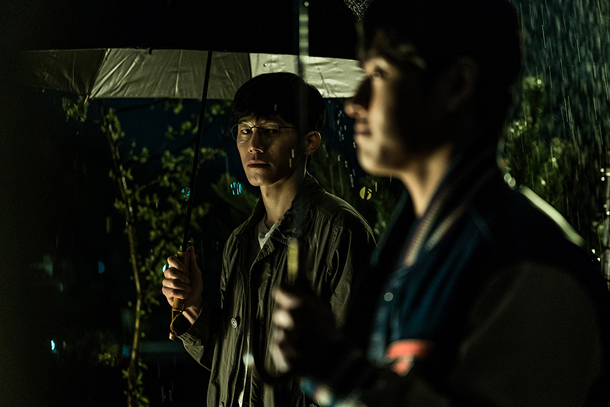 The upcoming “Forgotten” is a mystery thriller with heart-pounding twists throughout.

Starring Kang Ha-neul and Kim Moo-yul, the movie revolves around Jin-seok (Kang), who suffers from a nervous breakdown, and his older brother Yu-seok (Kim). Though the two are close, Jin-seok notices changes in his brother after he miraculously returns from being violently kidnapped. Jin-seok starts to doubt that the man who came back is his brother, but Yu-seok reassures his younger brother that his change in behavior is a memory problem derived from his illness. Unable to get over his doubt, Jin-seok follows his older brother, and learns more about his own identity.

“Kim Moo-yul is like Janus. He is able to make you concentrate with his unexpected charms,” said writer-director Jang Hang-jun, who is sitting in the director’s chair for the first time in nine years, at a press event held in central Seoul on Wednesday.

“As for Kang Ha-neul, I was very impressed with his acting in ‘DongJu; the Portrait of a Poet’ (2016), and I was equally impressed with him while working on this film. He is a natural actor,” Jang said. Kang is currently participating in his mandatory military service.

The director explained that instead of trying to show off flashy techniques, he instead focused on following the emotions of characters to maximize the suspense.

“Though Yu-seok shows a broad range of emotions, he has a clear purpose. I tried to focus on that purpose,” said Kim, who was also present.

The film is rated 15 and above and will arrive in local theaters on Nov. 29.