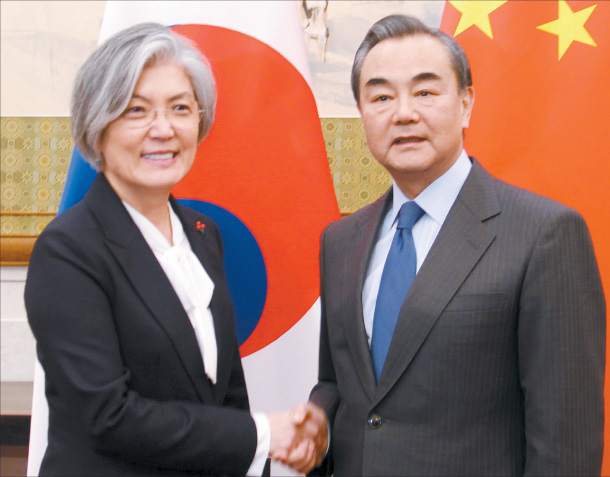 China officially requested military talks with Korea over the issue of the deployment of the Terminal High Altitude Area Defense (Thaad) battery during a meeting between the two countries’ top envoys in Beijing, according to a senior Korean government official Thursday.

The senior official said, “China hopes for talks between military officials as soon as possible,” adding that the message would be conveyed to the Korean Ministry of National Defense.

Korean Foreign Minister Kang Kyung-wha kicked off her first visit to Beijing Tuesday and held bilateral talks with her Chinese counterpart, Wang Yi, on Wednesday, that lasted late into the evening.

The two sides agreed to President Moon Jae-in’s first visit to Beijing since he took office in mid-December and a summit with Chinese President Xi Jinping. Along with making preparations for Moon’s visit, they reaffirmed that the North Korea nuclear issue should be resolved peacefully through dialogue, according to the Ministry of Foreign Affairs in Seoul, and discussed how to normalize relations.

Foreign Minister Kang told the National Assembly at the end of last month that Seoul is not considering additional Thaad deployment, that security cooperation among Korea, Japan and the United States will not evolve into a trilateral military alliance and that Seoul has no intention to participate in a U.S.-led missile defense regime. The so-called “three nos” were meant to assuage Beijing’s security concerns after its economic retaliations for Korea’s decision to deploy the Thaad battery.

On Oct. 31, the two countries’ foreign ministry officials agreed to mend relations and return to “a normal development track,” which was followed up by a summit between Moon and Xi on the sidelines of an Asia-Pacific Economic Cooperation (APEC) meeting earlier this month in Da Nang, Vietnam. It was announced that Moon would make his first trip to Beijing since he took office.

“Consultation through military channels is something agreed upon by the governments,” said the senior official on the Thaad issue, “and will be held soon.”

This may indicate China is looking for concrete guarantees that the deployment of Thaad to Korea will not infringe upon its security interests.

A Blue House official said, “In order for Thaad-related issues not to be brought up in the leaders’ summit, of course there needs to be such working-level talks beforehand.”

According to the Oct. 31 agreement, the two sides agreed to communicate on issues that China is concerned about through channels between military authorities.

Wang expressed China’s opposition to the Thaad system during the talks with Kang and called for Korea to resolve the situation through “action.”

“We emphasized that we need to gather strength for the normalization of the two countries’ relations in all areas,” Kang told reporters at the Four Seasons Hotel in Beijing after the talks, “and in order to do so, ahead of the president’s visit to China, the difficulties Korean companies face there have to be alleviated and people-to-people exchanges have to be revitalized.”

Kang added that Wang maintained China’s position opposing the Thaad deployment, but also called for “active measures” to bolster exchanges in all areas.

When asked if there was discussion of stringent regulations that have targeted Korean companies like Lotte Mart in China or restrictions on group tour packages to Korea, Kang replied, “Specific issues were not discussed.”

She said that Wang spoke of people-to-people exchanges, and added, “As much as there was fundamentally an agreement to normalize the situation as soon as possible, I believe such measures will taken.”

Some analysts speculate that China may request technical explanations about the Thaad system, inspection of the Thaad unit or a barrier to the powerful X-band radar in the direction facing China.

However, Noh Kyu-duk, spokesman of the Korean Foreign Ministry, shot down such rumors. “Such content is not true,” he said on Thursday.

“Because the Thaad battery is operated by the U.S. military, measures such as installing some sort of barrier to block the radar is not something that Korea can decide upon.”

Wang also requested Korea collaborate on its “One Belt, One Road” infrastructure initiative, and Noh said that Seoul is considering it.