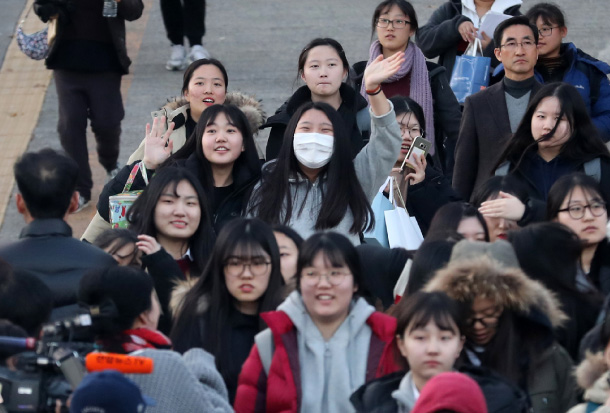 High school students safely took the 2018 College Scholastic Ability Test (CSAT) without any additional delays, the Natural Disaster and Safety Management division of the Ministry of the Interior and Safety announced Thursday.

The CSAT was rescheduled after a 5.4-magnitude earthquake hit the city of Pohang last week. The city has since faced 64 aftershocks. Though there was an aftershock with a magnitude of 1.7, and a brief flickering of lights at Idong Middle School, during the math section of the exam at 11:35 a.m., the Gyeongsangbuk-do Office of Education (GBE) did not halt the test.

Regarding the flickering, an employee from the Korea Electric Power Data Network (Kepco) said the voltage dropped due to complications in the power lines, but that “it was not a major problem.” Kepco, however, examined the power lines to prevent further disturbances.

The aftershock occurred 9 kilometers (5.6 miles) from Buk District during the second period of the CSAT. An official from the GBE said the office decided not to pause the exam because no tremors were felt.

The Pohang Office of Education under the GBE released guidelines on their website on Wednesday for exam supervisors and students to follow in case of an earthquake, permitting supervisors to evacuate examinees if “there are big tremors” and “concern for harm or damages.”

Though the CSAT was carried out without further delays, the GBE announced that drop-out rates reached 9.73 percent in Pohang, including Uljin County and Yeongdeok County. Out of 6,063 registered students, 590 dropped out of the English section of the exam, which took place in the third period.