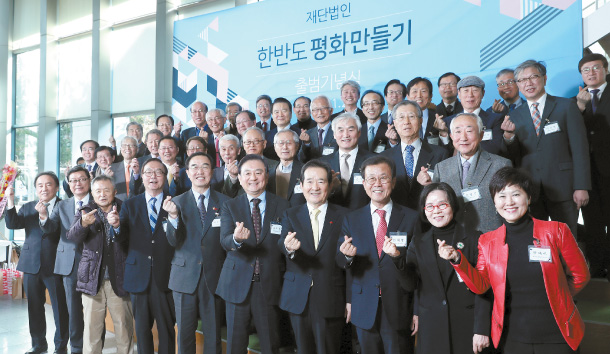 The Korea Peace Foundation, which will bring together liberal and conservative voices to propose policies and promote research and cultural activities in support of unification, was officially launched Thursday at World Culture Open in central Seoul.

An academic conference was held on the same day to mark the launch of the foundation, bringing together leading scholars, experts and government officials, including Unification Minister Cho Myoung-gyon, to discuss Pyongyang’s denuclearization and how to bring about peace on the Korean Peninsula.

There was a consensus that, based on the failure over the past 25 years to denuclearize the North, a new approach is needed, and that there should be no war on the peninsula without consent from South Korea. They also agreed that a freeze on North Korea’s nuclear and missile programs was the first step toward denuclearization.

“The South Korea-U.S. alliance and their combined defense has to be the basis of containing North Korea,” said Hong Seok-hyun, chairman of the Korea Peace Foundation.

In a keynote speech at the ceremony to launch the foundation, Hong, also chairman of the JoongAng Media Network, emphasized the importance of the Donald Trump administration declaring the “four nos,” meaning it is not seeking regime change, regime collapse, an accelerated reunification of the peninsula or military deployment north of the 38th parallel.

“This declaration can become the first step for the United States toward dialogue to built trust with North Korea and recognize it as a country and guarantee its regime,” he added.

There also needs to be an innovative way to bolster cooperation between the five-party countries, said Hong, adding that Russia may have a role to play in this as it has relatively good relations with both Koreas, China, Japan and the United States.