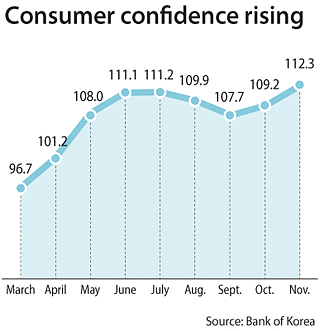 The composite consumer sentiment index for November stood at 112.3, up 3.1 points from the previous month, according to the Bank of Korea. A reading above 100 means optimists outnumber pessimists.

The concerns have abated in recent weeks as North Korea has not carried out any provocations since Sept. 15, when it launched a Hwasong-12 intermediate-range ballistic missile that flew over Japan into the Pacific Ocean.

The central bank also said its index measuring people’s sentiment regarding current economic conditions was 98 in November, the highest in seven years.

Another index measuring the public’s feelings toward economic conditions in the next six months rose from 99 to 108 in the past month.

The reading is based on a survey of 2,017 households throughout the country between Nov. 10 and 17.