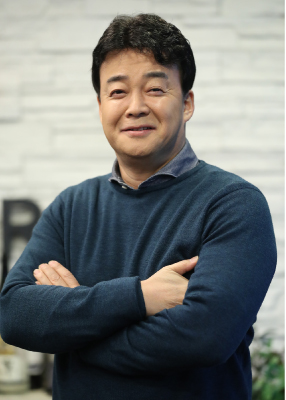 Baek Jong-won, CEO of The Born Korea Co., during an interview with Yonhap News Agency at his office in southern Seoul on Nov. 20. [YONHAP]

Restaurant franchise mogul Baek Jong-won, who rose to stardom in recent years for his TV cooking reality shows, shook off his popular good-natured grin and easy-going Chungcheong dialect for his new reality show.

He, instead, turned into a strict and outspoken teacher on the food truck-training program titled “Baek Jong-won’s Food Truck.”

“This is what I really am in the kitchen. I’m quite foul-mouthed, too. On broadcasting programs, I control my temper multiple times because I’m right in front of the camera,” Baek said with a laugh during a recent interview with Yonhap News Agency in his office in southern Seoul.

Baek has become more famous than his celebrity wife So Yoo-jin, spreading astonishingly simple yet tasty recipes for Korean home staples through such shows as “House Cook Master Baek” and “My Little Television.” He later hosted “Baek Jong-won’s Three Great Emperors,” the SBS TV program for introducing decent but less known restaurants around the country.

Asked why he has steadily appeared on cooking shows and so-called meokbang programs where a host eats a heavy meal while interacting with viewers, the 51-year-old restaurateur answered that he ultimately wants to change people’s perception of food services.

As for the meaning of the new program on the SBS channel, he said encouraging the jobless to start their own businesses with a little money is what the program intended.

“Once we try to start a food truck, you’ll learn the basics of whatever job you do next time,” he said.

The restaurant franchise mogul stressed that there is no easy way to make big money.

“Food trucks may be a small business, but you’ll come to communicate with customers, stay up late developing new menus and even worry about tomorrow’s weather. If you passionately do even small things, you’ll find it interesting and achieve success. I think that small success will be a big asset if you stay in the food business or shift to other jobs.”

In the new SBS TV show, Baek pours out the secret to his successes in cooking and the restaurant business, which he learned by trial and error over several decades.

“Since I had to learn them for myself without a teacher, it would be a lie if I said I have no regrets about sharing my hard-won know-how,” he said. “But I’m fine because I don’t share it with only one contestant but with all those who watch the show on TV. I want to change the public perception that opening a restaurant would be the last chip for unsuccessful self-employed workers who came to a dead end.”

Most people open a restaurant without much preparation, inspired by lucrative restaurants, but in fact more than 90 percent of them go out of business, he cautioned.

“Whatever business you do, we should try to learn from the examples of unsuccessful restaurants of the same kind. Before you start a business, you should prepare for plans to hold out when it goes badly at first.”

After “Food Truck,” Baek said he wants to create a television program that can help revive struggling independent stores in various neighborhoods.

“People think if a store thrives, other stores in the same neighborhood wither, but actually it is not true. They all thrive. The smaller the village, the quicker it happens.”