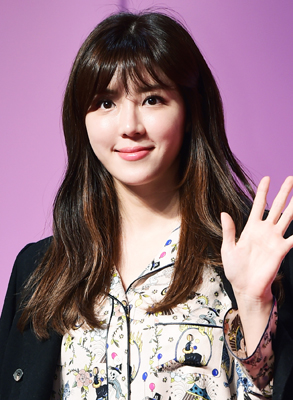 Actor Park Han-byul posted on Instagram on Friday that she recently got married, and is four months pregnant. The identity of her husband is unknown.

According to Park, she has been keeping her pregnancy under wraps to not disturb the shooting schedule of the MBC drama “Borg Mom” which she is currently starring in. Since the series ended production on Thursday, the actress decided to share the good news to her fans the very next day. She began working on the drama on Sept. 15.

She ended the post by stating that although she has become a wife and will be a mother, she will still continue her career as an actress.

The actor made her debut in the entertainment scene as a model on the cover of fashion magazine “Ceci” in 2002, and made her first on-screen appearance in the 2003 horror movie, “Wishing Stairs.”

She became even more famous in 2009, when it was revealed that the she and singer Se7en had been in a relationship since 2002. The couple were together until 2013, when they broke up after Se7en was involved in rumors that he had visited an illegal massage shop while completing his mandatory military service. Se7en was put into a military prison for 10 days for leaving his post without permission.