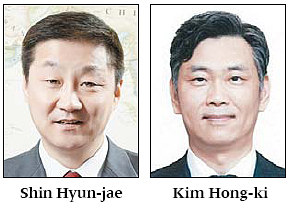 CJ Group announced the results on Friday of its largest-ever personnel reshuffle, promoting 81 employees to or within the executive level. This was the first reshuffling to come after Chairman Lee Jay-hyun returned to helm the group this year.

Shin entered CJ O’Shopping in 2000 and has also served at CJ Korea Express. His former position was as chief operating officer at CJ Corporation.

Kim also joined the group in 2000, starting with CJ CheilJedang. He was the HR executive for CJ Corporation since 2014 and received positive feedback for pulling in talented personnel to the company’s core.

Among the 81 on the list, 42 newly entered the group’s executive level, which is the largest in CJ’s history. By age, the list started with those in their late 30s.

CJ Chairman Lee Jay-hyun’s daughter, Lee Kyeong-hoo, who heads CJ’s marketing in the United States, and his son-in-law, Jung Jhong-hwan, CEO of CJ America, were both promoted one rank higher from executive director. The first third-generation member of the group’s founding family to join CJ’s core personnel, Lee and her husband both entered the executive level in March.

The volume of CJ’s reshuffle and the appointment of younger CEOs demonstrates the conglomerate’s will to expand and implement a more aggressive business strategy next year.

Chairman Lee was pardoned in August of last year after serving two and a half years in prison for business malpractice, but it was not until May that he made an official comeback to CJ’s administration.

In terms of its business portfolio, CJ CheilJedang is largely divided into four divisions: food, food ingredients, bio (bioscience products like MSG) and feed and livestock. According to the reform plan, these four categories will be merged into two larger departments, food and bio, which will be headed each by chief executive vice president Kang Sin-ho and CEO Shin Hyun-jae to enhance management efficiency.