Toxicologist is one of the world’s most cited

Toxicologist is one of the world’s most cited 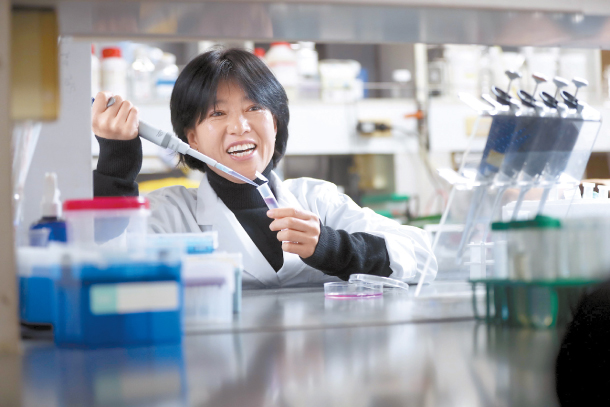 Toxicologist Park Eun-jung conducts her research on the fourth floor of a research facility at Ajou University School of Medicine on Nov. 17. [OH JONG-TAEK]

But Park persevered, caring for her child and father-in-law, mourning her mother and going on to become one of nation’s most successful scientists.

She is now a research fellow of toxicology at Ajou University School of Medicine, and is in the top 1 percent of the most cited professionals in the field of pharmacology and toxicology, according to Clarivate Analytics’ 2017 Highly Cited Researchers (HCR) list, published on Nov. 15.

Park’s toxicology papers have been cited about 500 times and are well-known among toxicologists worldwide.

In her work, she examines nanotoxicity in common nanomaterials such as sunscreens, cosmetics, electronics, sporting goods and stain-resistant clothing.

Park’s initial interest in nanotoxicity formed when her family members were diagnosed with cancer, one after the other. She began to study the toxicants we encounter in our everyday lives and the illnesses that result from environmental pollution.

Because her family struggled financially during her high school years, Park could only consider universities that offered her a four-year scholarship, despite her excellent grades.

After school, she began work at Korea Electric Power Corporation, but resigned within a year due to her pregnancy. Three years later, Park was accepted to her alma mater, Dongduk Women’s University, for a master’s degree in pharmaceutical science.

Eight years after her mother’s death, Park began her doctoral studies at age 36, and was finished in three years. During that time, she published five journal articles in the Society of Chemical Industry (SCI), headquartered in London, which was considered an unusual accomplishment by her graduate school.

Despite her achievements, she was not offered any stable positions as a professor because she was not affiliated with a prestigious university and because of her relatively advanced age. But in 2011, Park secured 150 million won ($135,159) to fund her research for five years, as a recipient of the Presidential Post-Doctoral Fellowship, awarded by the National Research Foundation of Korea.

Park released 65 journal articles through the SCI, and a total of 85 articles to national organizations.

“No matter what they say, I’m just so happy to be able to conduct research,” says Park. “Many people scoff at me when I say this, but I’ll just show them by receiving a Nobel Prize.”

Park was recently offered a position as a tenured research professor at Korea Advanced Institute of Science and Technology (KAIST). Though the institute offered her a full-time position as a teaching professor, Park declined. She says, “I am scared to stand and teach in front of the brightest minds at the nation’s best university.”

KAIST has never offered a tenured research fellow position to anyone. Park will be the first to carry out her research under the new title.