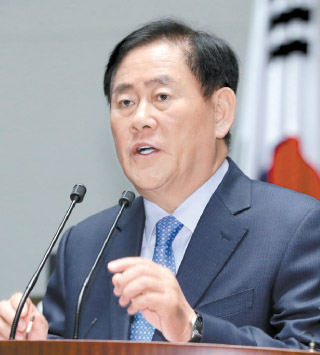 Choi Kyung-hwan, a Liberty Korea Party lawmaker, defends himself in the National Assembly on Friday. [YONHAP]

The main opposition Liberty Korea Party (LKP) is calling for a parliamentary probe and a special counsel to investigate suspicions that the prosecution offered improper payments to the Ministry of Justice, and demanding that the Kim Dae-jung and Roh Moo-hyun administrations be investigated.

Chung Woo-taik, floor leader of the party, said in a general meeting Friday, “We will submit a request for a probe into the bribery case involving special operation funds by the prosecution and the National Intelligence Service today.”

He was referring to allegations that the prosecution gave 10.5 billion won ($9.7 million) of its so-called annual special activity funds to Justice Ministry officials that oversees the prosecution’s personnel matters and other key affairs.

Chung called for a special counsel to investigate the use of illegal use of such funds under the liberal Roh Moo-hyun and Kim Dae-jung administrations over 10 years.

The party’s move was seen as a counterpunch to ongoing investigations by the prosecution into allegations that the National Intelligence Service (NIS) routinely diverted money from its special operations fund to the Blue House during the Park Geun-hye administration.

The prosecution has been investigating suspicious transfers from the NIS’s special operations fund to the Blue House during the four years of the Park presidency, and two former NIS directors - Lee Byung-kee and Nam Jae-joon - were arrested last week for their alleged roles in suspected payments of at least 4 billion won to aides of Park, Ahn Bong-geun and Lee Jae-man. Ahn and Lee were also arrested earlier this month.

Choi Kyung-hwan, a lawmaker of the LKP, also will be questioned by prosecutors next week over allegations he received a kickback of 100 million from the NIS in 2014 when serving as deputy prime minister and finance minister.

Hong Joon-pyo, chairman of the LKP, told reporters earlier this week that the justice minister and prosecutor-general must face investigations over allegations of prosecutors’ use of the special activity funds.

Hong said these funds, which prosecutors allegedly offered to the Justice Ministry, “are not different from the NIS’ special activity funds.”

The ruling Democratic Party on Friday lashed back. Kang Hoon-sik, a floor spokesman of the party, said in a briefing at the National Assembly, “The LKP linking the special activity fund with the NIS special operations fund case is a typical case of watering down the situation.”

In a Facebook post on Friday, Hong wrote, “We are calling for a special probe into the issue so that the Kim Dae-jung, Roh Moo-hyun administrations, and the current administration’s NIS and Blue House’s special activity funds can be accounted for.”