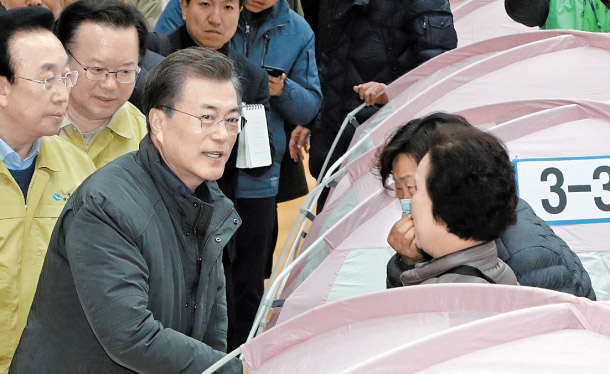 President Moon Jae-in, left, consoles people forced to live in the Heunghae Gymnasium in Pohang after their houses were damaged by a recent earthquake. Moon made a surprise visit to Pohang on Friday. [YONHAP]

President Moon Jae-in made a surprise visit Friday to the southeastern city of Pohang, which was recently struck by a 5.4 magnitude earthquake that forced thousands of people to abandon their homes.

The second strongest quake recorded in the country rattled the coastal city, which lies 370 kilometers (230 miles) from Seoul, on Nov. 15.

“We have once again clearly confirmed the fact that our country is no longer a safe zone from earthquakes,” the president said in a Cabinet meeting held at the Blue House on Tuesday.

The quake forced the nation to postpone its annual college entrance exam, affecting nearly 600,000 college applicants across the nation. The test was taken Thursday following a weeklong delay.

The latest earthquake came about a year after a 5.8 magnitude quake struck Gyeongju in September 2016.

Moon’s trip to the city began with a visit to a local high school, according to Blue House pool reports.

There, he met a group of high school seniors and acknowledged their hardship, noting they were forced to take possibly the most important exam in their life under fears of aftershocks.

Some 65 aftershocks of 2.0 or greater magnitude have followed the Nov. 15 quake so far, according to the weather agency.

The government declared a special disaster zone in the quake-hit area on Monday. More than 18,000 homes and apartments have been reported damaged, with 1,380 people displaced from their homes as of Thursday.