KLPGA Tour players defeated LPGA Tour players at the 2017 ING Life Champions Trophy Park In-bee Invitational at Blue One the Honors Country Club in Gyeongju, North Gyeongsang, on Sunday. This was the first loss for the LPGA since the tournament started in 2015. 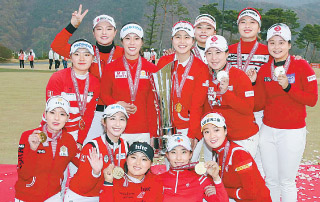 Ko Jin-yong led the KLPGA team to victory with a strong performance. By defeating LPGA team member Kim Sei-young three up, with two holes remaining, Ko’s point finalized the KLPGA team’s victory regardless of the result of the other matches by getting the team to 12.5 points.

Prior to the match, Kim was confident that she would hand Ko her first individual loss in the tournament, but failed to do so. After the first nine holes, Ko was four up, and with a 1.5-meter (4.9-foot) birdie putt on the 16th, she secured her win.

Ko has never lost a match at the tournament, and once again, by playing all square in four ball and foursome matches, and winning the singles match, Ko improved her record to five wins and four ties.

Even Park In-bee and Ryu So-yeon have not achieved such a record.

Many spectators visited the tournament on the final day to watch Ko, as it was her last tournament before playing full time on the LPGA Tour next season. Ko won the LPGA KEB Hana Bank Championship in October, and with the win, she earned full-time status on the LPGA Tour for 2018.

The match between Kim Hyo-joo and Lee Jeong-eun was a nail-biter. There was not a clear leader heading into the last hole. Kim made an attempt to claim her victory with a birdie on the final hole, but barely defeated Lee by making par.

Bae Seon-woo was selected as the MVP, winning all three matches for the KLPGA team. Prior to this year, Bae has never won a match at the tournament, losing all six of her previous matches. In the singles match, Bae defeated Ryu, the LPGA Tour’s player of the year, by three.

“It was a great experience and will be a great memory,” said Choi Na-yeon.

Lee Jeong-eun, of the LPGA team, was satisfied after participating in the tournament, saying, “Since golf is an individual sport, we don’t get this kind of opportunity during the season. It was like a gift that I got to spend more time with younger players and build friendship with others.”

Lee was selected as the LPGA team’s MVP, with a tournament record of two wins and one loss.

Fans were eager to check out the final match play of the day, between Chun In-gee and Jang Ha-na. But since Jang withdrew due to a wrist injury, Chun played against Kim Min-sun. Chun won by a hole on the 18th.

“It feels better than winning a tournament,” said Lee Jeong-eun, who played on the KLPGA team.