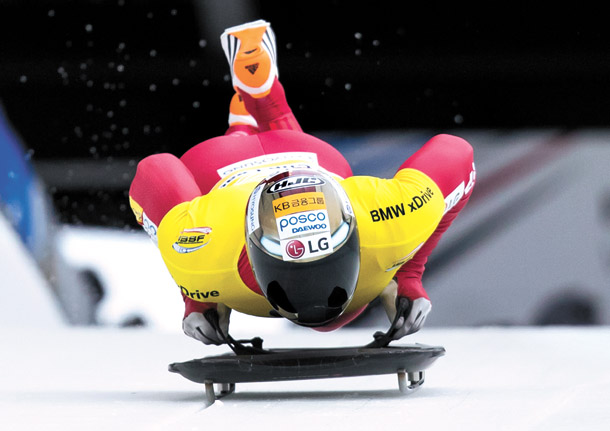 A week after winning his first gold medal of the season at the BMW International Bobsleigh and Skeleton Federation (IBSF) World Cup in Park City, Utah, Yun Sung-bin picked up his second gold medal in Whistler, Canada, on Saturday.

Yun finished the third IBSF World Cup race with a total time of 1:44.34, three-quarters of a second ahead of Nikita Tregubov of Russia. Martin Dukurs of Latvia, who has won a total of 49 BMW IBSF World Cup races in his career, finished sixth at 1:45.51.

It was the first time Yun has won back-to-back titles.

Wearing the yellow vest bestowed to the top-ranked racer, Yun had the best races from start to finish. The 23-year-old was first in start times in both races, at 4.52 seconds and 4.50 seconds. Yun’s first run time of 51.99 seconds was good enough to be a new record at Whistler Track, his second track record in two consecutive weeks.

“I’m very happy that I earned a good result again after the second World Cup race,” Yun told Yonhap. “I think it was possible because I do have some experience in North America. I will work hard to get the same results in Europe.”

Throughout Yun’s career, he has performed well in Whistler, including capturing his first IBSF World Cup title in the 2016-17 season.

Yun won the first BMW IBSF World Cup race of the season in December 2016 at Whistler Track by defeating Alexander Tretiakov of Russia, with a time of 1:45.86.

Additionally, Whistler Track was where Yun picked up his first career victory at the Intercontinental Cup in January 2014.

With this weekend’s victory, Yun now has 660 points in the 2017-18 season, 49 points ahead of Dukurs, and his head-to-head record against Dukurs has improved to five wins and six losses.

Aside from Yun, Whistler Track has been a lucky place for Korea’s sliding team, as Korea’s two-man bobsled team - Won Yun-jong and Seo Young-woo - picked up their first BMW IBSF World Cup title for the 2015-16 season in January 2016.

This season, the two-man bobsled team got off to a slow start, finishing 10th and 13th in the first two World Cup races.

But on Saturday, the duo managed to record their best finish of the season at the BMW IBSF World Cup, coming in sixth with a time of 1:44.51.