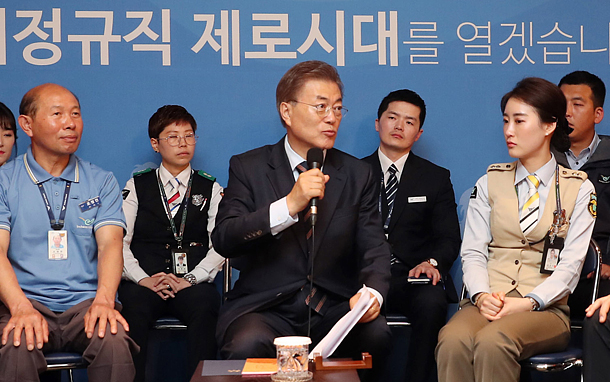 President Moon Jae-in promises employees of Incheon International Airport that his government will put contract workers on a permanent payroll by the end of this year during a meeting with workers in May. [YONHAP]

Incheon International Airport became the first target of President Moon Jae-in’s push to have “zero irregular employees in the public sector” because of its notoriously high dependency on contract workers. Nearly 90 percent of its workforce, or 10,000 employees, are “irregular,” hired on a contract basis.

Moon’s goal of putting them on a permanent payroll — making them “regular” employees — was enough to give hope to 420,000 irregular workers currently employed in the public sector. It was a grand drama playing out in the first year of a liberal administration.

Two days after taking office on May 10, Moon visited the airport and got a promise from its CEO to make all its irregular workers regular by the end of this year, but it’s not likely to happen in time. The Korea Management Association, upon a consultation request from the airport, released a report on Thursday concluding that 100 percent conversion by the end of the year was practically impossible.

The interests of the management, regular workers and irregular workers diverge a lot. Government guidelines state that positions directly related to safety and life should be converted first. The report found these positions, such as police and firefighters, make up about 10 percent of staff.

But another report reflecting the union’s position proposes that 90 percent of irregular employees should be offered regular employment without any competition.

As the airport includes various jobs, 60 irregular positions, including security guards, custodians and attendants, and 50 occupational groups all have different retirement ages, salaries and benefit systems. Workers belong to different unions such as the Korea Confederation of Trade Unions, the Federation of Korean Trade Unions and others.

Since a third of the workers belong to the militant Korea Confederation of Trade Unions, its 1,100 members held a protest at the airport earlier this month, demanding 100 percent conversion of employees without a competitive process.

The discord among workers has intensified because regular workers are dissatisfied with the stronger voices of irregular workers. A hearing held Thursday in the airport became a battle over jobs between regular and irregular employees.

The union of regular employees carried signs saying, “No free ride! Fair society, open hiring!” and “No to equal results, yes to equal opportunities!” Newly hired regular workers opined, “We studied hard for the civil service exam for several years and got through competition with odds of one to several hundreds. Becoming a regular employee without competition is a free ride. That’s not fair.”

Incheon International Airport could be ruined if the conversion of employment status is pushed too far. It could instead become a grave for irregular employees, not a place of hope. It would be cruel for them to remain under the same roof, witnessing discrimination that is not corrected.

The Korea Land and Housing Corporation is an example. Since it was established eight years ago through a merger of two giant corporations, it still struggles with its integration process of four labor unions. It may be impossible to convert the status of 10,000 irregular employees of the most complicated public corporation in Korea into regular employment within seven months.

Perhaps Blue House aides had given the president bad advice about public corporate reform. Perhaps Incheon International Airport should be let go now. The new administration should be given enough time to draft a fresh field guide for irregular employment solutions.

The airport should be a role model for many other public corporations waiting for solutions, not a white paper of failure. The airport, which received top marks on world airport rankings for 12 consecutive years, should not be criticized for being a guinea pig in Moon’s employment experiment.

Incheon International Airport is the gateway to Korea and frontline of the PyeongChang Winter Olympics. It should be allowed to focus on opening its second passenger terminal in January and preparing for the Olympics in February. As the United Nations adopted an Olympic Truce for PyeongChang, the battle over jobs at the airport should also call a truce. It is not too late to discuss the irregular employment issue after the Olympics.