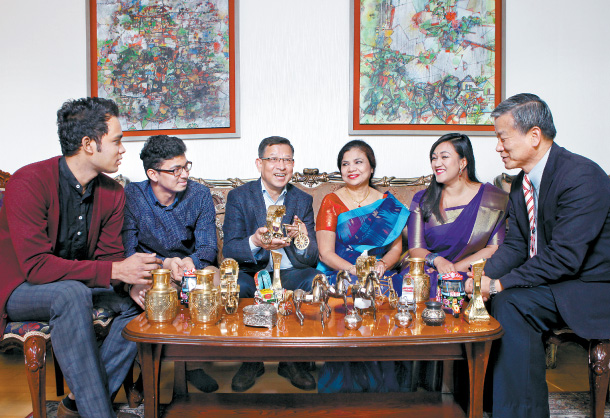 Ashik Rahman Ruso and Tabassum Nasrin Haque, two young Bangladeshis who came to Korea on the same government scholarship, became husband and wife after meeting at a flash mob in Seoul.

Though their wedding — a two-day celebration involving lots of dancing and eating with hundreds of relatives — was held in Bangladesh, by the time they got married they had made enough friends in Korea to fill a wedding hall in Seoul had they decided to hold it here.

Tabassum Nasrin Haque: I was travelling from Gwangju to Seoul to meet my fiance by express bus and there was a nice middle aged gentleman sitting beside me. He was looking elegant and was reading newspaper all the time. At the midway break time he brought a cup of coffee for him and put it in the cup holder of the seat and again started reading the newspaper. I was actually doing my makeup at that time. When I was done looking in the mirror, he gave me the cup. He actually brought hot chocolate for me and was waiting for me to finish what I was doing. So we started talking.

Haque: He was really friendly, he even told me that he has a wish to open a company in Bangladesh. After we reached Seoul he asked if I wanted to have breakfast together but I was in a rush as my fiance was waiting for me. So I had to tell him sorry and that we will meet some other day. He then took out some money from his wallet and offered me that as pocket money, or yongdon in Korean. I said, “No, I cannot take that.” He said, “If I were your father would you still say no to pocket money from me? I just wish you two to have a nice meal together with the money.”

I couldn’t answer that — I just took the folded money as it was and said thank you and left. I didn’t even count how much because it was already emotional for me seeing so much affection coming from a stranger.

Haque: I later met my fiance and then I opened my palm and saw there was 100,000 won [$92] in my hand. I didn’t actually expect that and was feeling thankful to him. Later we went to a very good restaurant and took photos of the food we were having and sent them to him through KakaoTalk. I told him thank you but I know thank you isn’t enough for the love I got from this father-like stranger. I still am in touch with him.

Ashik Rahman Ruso: Once I helped a grandma who had traveled into Seoul from Paju and was lost. After helping her find her home, it was pitch dark outside so I ended up staying at their place at night. After that, they got in touch with me and I would stay at their place for Seollal [Lunar New Year] and they would come see me at my orientation here. The grandma passed away two years ago and the grandpa moved to the United States with his son. We cried a lot when we said goodbye. Though we’re far away, he is my Korean grandpa. And I have a Korean dad, too, but that’s another story.

Left: Kim Seoung-su, right, and the mother of a Bangladeshi who is working in Korea, during the visit he paid her in Gazipur, Bangladesh, in January last year. Kim brought a message from her son, who had not been able to visit his mother in three years. Right: Ashik Rahman Ruso, left, and Tabassum Nasrin Haque at the Taebaeksan Mountain Snow Festival in 2014. [KIM SEONG-SU, ASHIK RAHMAN RUSO]

Since arriving in Korea three years ago, Ambassador Zulfiqur Rahman has not missed opportunities to be close to both Koreans and Bangladeshis here, including participating in a parade by driving a rickshaw in Changwon, South Gyeongsang.

Zulfiqur Rahman: Changwon hosts an annual festival called the Migrants’ Arirang Multicultural Festival and Bangladesh participated for the third time this year, and this year especially as the guest country of honor and the minister of cultural affairs and Bangladesh Shilpakala Academy came to participate. We had quite a few performances, one of which was the parade in which I drove a rickshaw — a very environmentally-friendly and popular form of transportation in Bangladesh.

Kim Seoung-su: And the ambassador travels everywhere in the country for opportunities to promote Bangladeshi culture or meet with his compatriots. I know that he cares about the Bangladeshi soft power, too, because he hosted a film festival of some 20 films from his homeland, all with Korean subtitles. Ambassador Rahman is the fourth Bangladeshi ambassador to Korea I am acquainted with, but he is the most passionate of them all in learning Korean and communicating with Koreans. Not a few months into his tenure, he gave a speech in Korean for a full 10 minutes or so at a public event.

Rahman: I find this quite unique in Korean people — they are so open to rest of the world. I will cherish this memory that I could establish Bangladesh as a commendable cultural power in Korea — thanks to the prowess of our culture, but credit also goes to the warm-hearted loving people of Korea. Taking this opportunity, I wish to put on record my deepest appreciation for all the organizations that provided us with excellent platforms for displaying our rich cultural heritage to our Korean friends. My heartfelt thanks also go for the Korean audience, who encouraged us all the way. This cultural bond between the two peoples, I am confident, would bring in enhanced cooperation in many other sectors of cooperation between Bangladesh and South Korea.

If he could share one Bangladeshi culture with Koreans, it would be a slower sense of lifestyle.

Rahman: You achieved in one generation what many countries couldn’t reach, but now it is time to slow down and have family life. There are demographic changes here, and for example, people don’t want to get married or have children, because of many reasons including feeling financially inept to have and raise children. 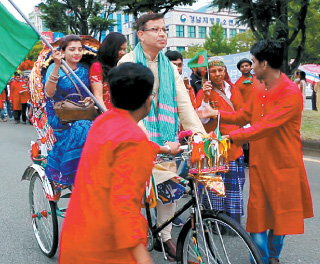 Bangladeshi Ambassador to Korea Zulfiqur Rahman driving a rickshaw at a parade in Changwon, South Gyeongsang, during the Migrants’ Arirang Multicultural Festival. The embassy won the grand prize among parade participants. [ZULFIQUR RAHMAN]

Ashik Rahman Ruso: What I’ve seen in Korean society is that fathers work all day and they come home at around 1 a.m., when everyone is sleeping, and for his children, he has become simply someone who earns money. And because they spend less time together, the father thinks that his children don’t care about him. If you go to Bangladesh, a father who earns maybe some 1 million won a month has a huge family at home — he lives with his parents and his children. When he comes home, he is greeted by everyone. From a rich person to a rickshaw puller, people are happy in any state.

If there is one thing that Korea could do more for Bangladeshis, it would be opening up the job market for more foreigners.

Rahman: It is my view that Korea needs to adopt a more liberal approach when it comes to welcoming foreign workers. Bangladesh has a vast reserve of easily trainable and disciplined young workers. They can complement Korea’s workforce in many sectors with their skills. This is particularly becoming critical if we look at the changing demographic trend of South Korea — marked by increase in the number of elderly people and less supply of young workers to the marketplace. Before it is too late, South Korea should adopt a realistic policy on this matter in order to keep its pace of economic development uninterrupted and opt for a win-win situation for both Korea and the migrant worker-supplying countries, including Bangladesh.

Every guest a king

Kim Seoung-su went to Bangladesh to work as a computer engineer at an NGO in 1993. Since he returned home in 1998, he has been a messenger for the Bangladeshis, traveling with video messages from Bangladeshi workers in Korea to their families in rural villages back home.

Kim: I spend more time with Bangladeshis here in Seoul than I do with Koreans on a daily basis, either in person or over the phone as both Koreans and Bangladeshis call me to sort out things like why a Bangladeshi worker is quitting work, where he or she can find good housing, or simply for language interpretation needs. But many of the Bangladeshi workers cannot go home for years because they don’t quite save up – they send what they earn back home every month. So when I visit Bangladesh every year, I bring with me video messages from them to their families.

Kim: When I started this project, the Bangladeshi families that I visited didn’t have TVs at home, so I would travel with my laptop filled with these video messages. I can take only some three or four messages at a time, because these families tend to live in very rural areas all over Bangladesh and I have to ask around to find these homes. I then come back to Korea with video messages from the families in return. It’s hard to witness these encounters without tears.

Kim says what he does is not comparable to the kindness locals bestowed upon him when he first moved to live in Dhaka in 1993.

Kim: I remember there used to be no barriers or walls dividing one house from another in the neighborhood that I lived in. So the first day I moved in, many neighbors were peeping into my house, some asking questions – pretty detailed questions, too, like how much I earn every month. I realized later on that this is just how friendly Bangladeshis are and how they really want to get to know you.

Once, I visited a locals’ home in rural Bangladesh that was made of metal sheets. The owner borrowed chicken from next door to cook up a hearty meal that I thought they themselves don’t enjoy except a few times a year. And every year I go back to the country, I am treated like a king in their homes, the Bangladeshis’ cordiality in treating their guests never ceases to surprise me.

Ambassador Zulfiqur Rahman arrived in Korea in July 2015. The top envoy joined the Bangladesh Foreign Service in 1991 and was previously posted to Los Angeles, Bahrain, New York, New Delhi and Ankara. Before his tenure as a diplomat, Rahman was previously a doctor. His wife is a practicing doctor as well. The couple has two sons. Though they grew up all over different countries, his second son Safwat Afif Rahman told Korea JoongAng Daily that with a father like his, it is hard to forget their Bangladeshi roots.

Tabassum Nasrin Haque works as an engineer, and her husband Ashik Rahman Ruso is employed at the international business division of a Korean company. The two came to Korea on the Korean Government Scholarship Program, Haque to a university in Gwangju and Rahman to Seoul National University. Though Haque had not intended to stay in Korea too long, she met Rahman at a flash mob and they got married in 2015.

Haque picked up a bit of her roots here, as she learned traditional Bangladeshi dancing after giving it up in her youth, and she performs regularly at cultural events here. Rahman, apart from his regular work, also appears on the KBS radio show “Hanminjok Hanaro.”

Kim Seoung-su worked as a computer engineer at a nongovernmental organization in Dhaka, Bangladesh, from 1993 to 1998. Since 2001 he has been assisting Bangladeshi workers in Incheon, especially in communicating with medical staff when they are ill or in finding information on visas, housing and other daily needs in Korea. Kim speaks fluent Bengali.