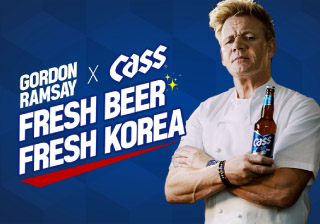 Five years ago, The Economist published an article titled “Fiery food, boring beer.” Two lines from the 36-sentence article elicited fiery responses in Korea. “And despite the recent creation of Hite Dry Finish — a step in the right direction — brewing remains just about the only useful activity at which North Korea beats the South. The North’s Taedonggang Beer, made with equipment imported from Britain, tastes surprisingly good.”

The analysis of South Korean beer being inferior to Taedonggang Beer from North Korea was interpreted as Korean beer tasting terrible. Later, I met Daniel Tudor, the writer of the article, and without hesitation, he picked a can of Cass at the convenience store.

When I asked about the discrepancy between his article and the purchase, Tudor said he was addressing monopoly in the beer industry, but readers focused more on the praise of North Korean beer and criticism of South Korean beer.

And he drank Cass on the convenience store bench as if it were the best thing in the world. He argued that Korean beers are mostly refreshing lagers, but he wanted to see more ale varieties.

Five years have passed, and the specter of another beer controversy has returned to Korean society. Once again, it was a British man who stirred the pot. Celebrity chef Gordon Ramsey, who is known for his foul mouth, has endorsed Cass in Korea and praised Korean beers. Some call him a monster of capitalism. He has been criticized for promoting Korean beer that tastes bad because of the money.

But the debate is meaningless. It is pathetic that some people are obsessed over how foreigners feel about Korean beer. Ramsey claims that Korean food is intense and goes well with lighter Korean beer. His argument is not about a mathematical formula and can have yeas and nays. Certain sensitive reactions are excessive. Beer companies may have calculated that Korean consumers are eager to get acknowledgement from foreigners when casting a foreign celebrity as a model.

Here, Tudor must have a lot to say on the issue. Asked about Tudor’s comment, Ramsey said at a press conference, “I wouldn’t worry much about what the British journalist said . . . but when I do meet him, I will give him a kick in the arse.”

When I asked Tudor about how he feels, he sent me a message proposing a beer drinking match, and if Ramsey loses, Tudor would kick him in the butt.

*The author is a reporter at Monthly JoongAng.