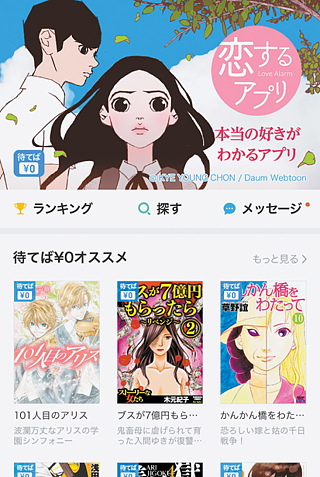 Kakao Japan’s Piccoma app’s front page and the cartoons that are offered. [KAKAO]

TOKYO - Webtoons are becoming a lucrative business for Korean IT companies and a new revenue source in the world’s largest manga market, Japan.

Of the top seven downloaded webtoon apps on Japan’s Google Play store, four are by Korean IT companies.

Piccoma has been the No.1 app in the Apple Store’s webtoon section since last month.

The Japanese manga market is estimated to be worth 5 trillion won ($4.6 billion), which is 10 times more than Korea’s. Kakao Japan’s Piccoma is estimated to have earned 300 million yen ($2.69 million) in revenue with average daily readers amounting to 1 million.

With its success, Kakao Japan is preparing an IPO on the Japanese stock market for its popular webtoon business in 2020.

The company’s office in Tokyo’s Roppongi district on a recent afternoon was busy with people from the manga industry trying to do deals or to get their manga uploaded on Piccoma.

“Our manga artists, who have seen the surge in popularity of competitors featured on Piccoma, have demanded that their work also be uploaded on the app,” said an official of a major Japanese manga publishing company that visited Kakao Japan’s office.

The success was hardly preordained considering Japan’s manga powerhouses like Shueisha and Shogakukan, which have a lock on the webtoon market there.

Kakao Japan chose a business strategy that allowed gamers free access to a game but only if they waited a certain length of time like 10 or 20 minutes. Similarly, to access a manga for free, the reader has to wait 24 hours before reading another.

But they can have immediate access if they pay and the waiting strategy appears to be a good way to get customers to pay.

Another strategy the company employed was providing free webtoons if a reader first played a bingo game or read another manga.

But Japanese consumers are actually more willing to pay for entertaining content compared to their Korean counterparts.

While Kakao Japan’s Piccoma has risen fast, Naver’s webtoon apps including No. 1 Line Manga and another by the company’s NHN Comico affiliate have steady readerships.

Line Manga has a monthly subscription of 1.5 million readers while Comico has 2 million.

The Korean companies quickly targeted the webtoon business, which was a niche market. The Japanese manga industry has been heavily focused on books drawn in traditional forms, which they have huge pride in.

Also, the Korean companies have put webtoons by Japanese artists at the forefront to minimize the cultural difference.

Japan is not the only market in which Korean webtoon apps are enjoying explosive success. They are also drawing a huge readership in Southeast Asian markets.

Line’s webtoons are read the most in Indonesia and Thailand. Taiwan is another big market.

Although the Chinese webtoon market is estimated at 120 billion won, which is smaller than that of Korea, Lezhin Comics believe more Chinese readers will be willing to pay for the comic series as Chinese consumers are coming around to quality content.