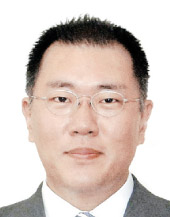 The heir apparent to Korea’s largest automaker will lead Asia’s governing body for archery for a fourth consecutive term after members approved an extension of his tenure during a general meeting in Bangladesh.

Chung has been serving as president of World Archery Asia since 2005. His current term will run until 2021.

The Korea Archery Association said in a statement Sunday that World Archery Asia recognized Chung for his investment and support in developing the sport in the region. They credited him for launching several development programs, including coaching seminars and training programs, and for providing equipment to member countries of World Archery Asia.

Hyundai Motor Group, which includes Kia Motors and auto parts supplier Hyundai Mobis, is the main sponsor of the Korea Archery Association and the national team, a relationship that dates back to the company’s founder, Chung Ju-yung, who served as director of the national team.

In past years, Korean archery has dominated global competitions.

During the 2016 Rio Olympics in Brazil, the team swept the podium, taking gold medals in all events including men and women’s individual events and men and women’s team events.