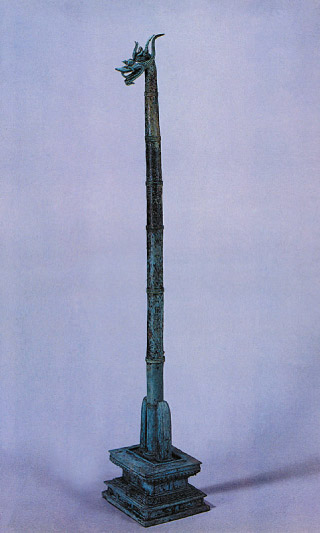 
In the past, temples used to hoist a flag, called a dang, on a flagpole, or danggan, at their entrance to announce a special event.

The top of this 73.8-centimeter (29-inch) gilt-bronze Miniature Buddhist Flagpole is adorned with the shape of a dragon head.

A couple of stone columns are attached to the two-tiered platform.

The pole is erected by inserting the pole into the gap between the two stone columns.

The pole is composed of eight interlocking cylinders, with the dragon head at the top.

Scales are inscribed on the neck of the dragon head to add to the realistic effect. The head, which also has long horns, was covered with a dark-brown lacquer and gold plating. Today, most of the gold plating is gone. It was made during the Goryeo Period (918-1392).

Since only the gold plating is missing and most of the danggan remain intact, this model is regarded as a particularly precious specimen.