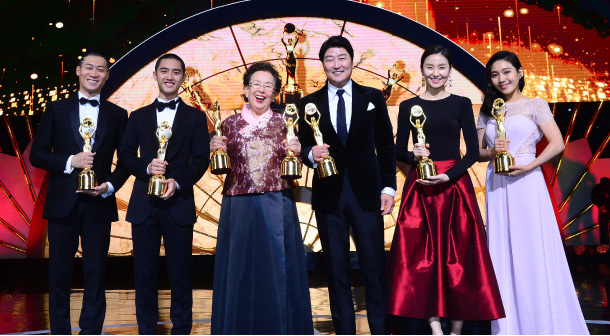 Winners pose for a photo at the end of the 38th Blue Dragon Awards, held on Nov. 25 at Kyung Hee University in eastern Seoul. From left are Jin Seon-kyu, Do Kyung-soo, Na Muni, Song Kang-ho, Kim So-jin and Choi Hui-seo. [JOONGANG ILBO]

The 38th Blue Dragon Awards, one of the most prestigious events in the Korean film industry, was held at the Grand Peace Hall of Kyung Hee University, eastern Seoul, on the evening of Nov. 25.

The Best Actor and Best Actress awards went to Song Kang-ho for his role of a taxi driver who witnesses the brutality of the 1980 Gwangju Democratic Uprising after taking a foreign journalist to the region in “A Taxi Driver,” and Na Muni for “I Can Speak,” where she portrayed a surviving “comfort woman,” a euphemistic term for a victim of Japan’s sexual slavery during World War II.

“Even aside all the politics and history, ‘A Taxi Driver’ is about what’s within our hearts; I wanted to get across the feeling of remorse that we all have as humans,” said Song in his acceptance speech. “The trophy is important, and the 10 million tickets sold are important, too. But the biggest honor I’ve had with this movie is that I was able to take a look at my heart with ‘A Taxi Driver.’ I think this [trophy] is given to me by the amazing audience. Thank you.”

Na, born in 1941, also thanked her fans and the organizers for granting her the award despite her old age. “I came here thinking that I should not have any expectations. But now that it turned out this way, I’m getting a little greedy. A lot of my peers have left the film industry, but I’m here receiving such a nice award. Thank you for giving this big award to old Na Muni. I’ll stay here like this and keep doing my best.”

“A Taxi Driver” also took home the Best Film award, having sold a total of 12,186,001 tickets when it was in theaters this summer, and has become the ninth best-selling movie in Korean film history. The director of “I Can Speak,” Kim Hyun-seok, was named Best Director for his movie.

Other winners included Jin Seon-kyu for his supporting role in “The Outlaws,” where he played a Korean-Chinese gang boss. Jin shed tears as he gave his acceptance speech for his first award in his career. Choi Hui-seo took home the Best Supporting Actress award for “Anarchist from Colony,” in which she played the role of Fumiko Kaneko, a Japanese anarchist married to a Korean anarchist named Park Yeol.

However, the ceremony wasn’t without its share of troubles, as reporters staged a boycott of the ceremony before it began, a first for the Blue Dragon Awards.

Due to rain on Saturday, the red carpet had to be canceled. The press requested the organizers move the pre-ceremony event, where they can get photos of the movie stars and have short interviews, indoors.

But organizers declined, saying that the inside of the theater could not be used. The press, who had been waiting outside in the rain for hours before the ceremony, decided to leave. Because of this decision, the ceremony was quieter than usual, with no flashbulbs going off or crowds to welcome the glamorous stars as they walked into the ceremony.

Many watching the program at home took to social media to point out the awkwardness of the ceremony’s co-host, actor Lee Sun-kyun. His partner, actress Kim Hye-soo, has hosted the awards show for the past 24 years, and viewers pointed out that next to her, Lee looked quite nervous throughout the night.

Despite the ups and downs, this year’s Blue Dragon Awards consoled many of the pains of Korea’s modern history, by awarding the night’s major prizes to movies that shed light on the past.

“A Taxi Driver” depicted the scenes during the 1980 Gwangju Democratic Uprising, “I Can Speak” showed the life of a surviving victim of Japan’s wartime sexual slavery and “Anarchist from Colony” revolved around the life of independence activist Park Yeol, who organized an anarchist group during the Japanese colonial period (1910-1945).