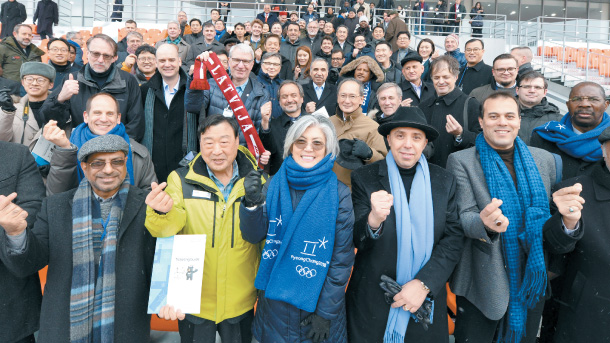 Kang Kyung-wha, Korea’s minister of foreign affairs, center; ambassadors to Korea; U.S. military officials; and Lee Hee-beom, president of the Olympic organizing committee, on Kang’s right, cheer on the upcoming Winter Games at PyeongChang Olympic Stadium in Gangwon on Saturday. The Ministry of Foreign Affairs organized a day trip for 200 members of the diplomatic corps and officials of the U.S. military officials, including Gen. Vincent Brooks, commander of the U.S. Forces Korea, to inspect and tour key Olympic facilities. [MINISTRY OF FOREIGN AFFAIRS]

Korean Minister of Foreign Affairs Kang Kyung-wha again extended an invitation for Pyongyang to attend the PyeongChang Winter Olympics in an effort to foster an atmosphere of peace and tolerance, as she led a group of 200 envoys and U.S. military officials, including Gen. Vincent Brooks, the commander of U.S. Forces Korea, in an inspection of the facilities for the upcoming Winter Games.

The group, which included 95 ambassadors and senior diplomats, and 24 U.S. Forces Korea officials, took the new KTX high-speed train line from Seoul Station to Gangneung Station, in Gangwon, which will officially open next month.

When asked by a reporter aboard the train if it is possible that North Korea will participate in the games, Kang replied, “There is definitely a possibility. There are the [North Korean pairs skaters] who qualified, but in order for them to participate, concrete measures have to be taken, and North Korea has yet to take such steps.”

Kang also emphasized that South Korea has “prepared all the hardware and software” in order to bolster safety during the upcoming Olympics. “We are firmly protecting peace and security on the Korean Peninsula through the ironclad Korea-U.S. combined defense posture. That is why Commander Brooks accompanying us today is especially meaningful.”

The group toured the Gangneung Olympic Park, including the Hockey Centre, as well as the PyeongChang Olympic Stadium, where the opening and closing ceremonies of the Winter Games will take place. Lee Hee-beom, president of the PyeongChang Organizing Committee for the 2018 Olympic and Paralympic Winter Games (Pocog), who guided the group, answered ambassadors’ questions about the upcoming games, ranging from transportation to concerns about the subzero temperatures in February.

Natsuo Yamaguchi, head of Komeito, the smaller partner in the ruling coalition with the Liberal Democratic Party, also led a Japanese delegation joining in the tour of the facilities. 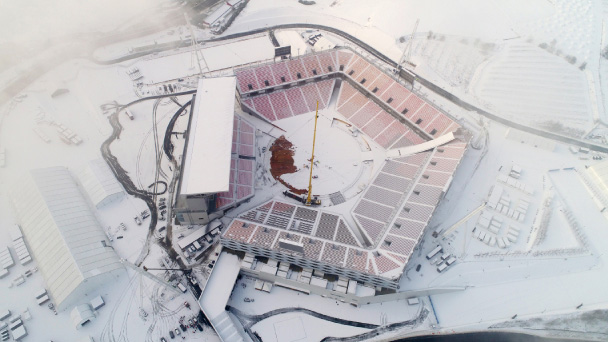 An aerial view of the PyeongChang Olympic Stadium after snowfall overnight covered Pyeongchang County, Gangwon, on Sunday with up to some 16 centimeters (6.3 inches) of snow. [YONHAP]

Brooks, also head of the UN Command, said in his luncheon remarks at the Seamarq Hotel in Gangneung, “As a senior official of the U.S. government, I would like to make very clear that we are going to do all that we can - and when I say we, I mean the U.S. Forces Korea and the United States Embassy - to make sure that these games are successful and safe, and we’ll be focused on that to make sure that it happens.”

Ambassador of Oman Mohamed Salim Alharthy, on behalf of the diplomatic corps in Korea, said, “The PyeongChang Olympics is not only a sport event but also a cultural event, and a testament of a number of cutting-edge technologies and projects that will showcase Korean technologies of the fourth industrial revolution.”

He said, “We assure you our support and cooperation of your government efforts for a successful hosting of the games and to make PyeongChang Winter Olympics inevitably a Games of peace,” adding he hoped it will “serve as an opportunity to ease tensions on the Korean Peninsula and to resume dialogue.”

“The Pyeongchang Games take place just south of the line that still divides the Korean Peninsula, and at a time when the international community is working closely together to force North Korea to give up its nuclear ambitions and achieve denuclearization in a peaceful manner,” said Kang in her luncheon remarks. “With participation of both East and West, 30 years ago, the 1988 Seoul Summer Olympic Games generated valuable momentum for reconciliation and peace between the two camps of the Cold War era.”

President Moon Jae-in “is rallying the country and the world to ensure a peaceful Olympics,” she said, in keeping with the UN Olympic Truce resolution. “Against this backdrop, I do hope that North Korea will come to the games as well. This will be a unique opportunity to forge inter-Korean reconciliation and peace, which will certainly be welcomed by the entire international community.”