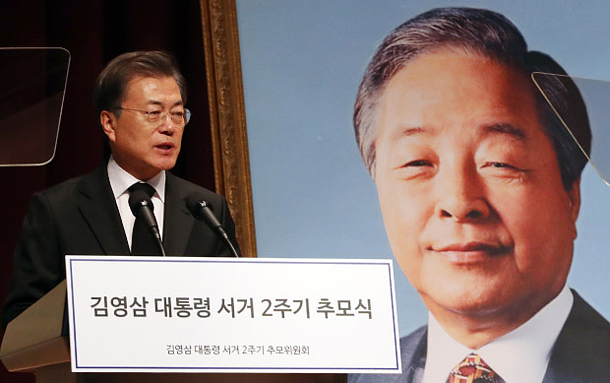 President Moon Jae-in delivers a speech at the National Cemetery in southern Seoul on Wednesday to commemorate former President Kim Young-sam, who passed away in 2015. [JOINT PRESS CORPS]

Kim Young-sam is an underrated president in Korean history. He ended decades of military rule and established the country’s first civilian government. But he failed to prevent a foreign currency crisis at the end of his term, and it overshadowed all his glorious accomplishments.

It was Kim who first introduced rules requiring Koreans to use their real names in financial dealings, an act that his predecessors put off. It would not be an exaggeration to give him credit for our current, more transparent financial system, which has established the foundation for the economic justice we have today.

There is no “what if” in history, but there were a number of opportunities to prevent the foreign exchange crisis under Kim Young-sam. One of the missed opportunities was labor reform.

In 1996, the fourth year of his term, the government formed a labor relations reform committee and prepared a revision to the labor law after seven months of deliberation. It included the introduction of layoffs and allowing multiple labor unions in umbrella groups.

However, the ruling New Korea Party then pushed a revision that would postpone the allowance of multiple unions by three years, and things started to go wrong. Labor unions fiercely resisted the plan, and amid the political chaos, another revision containing a two-year grace period for multiple unions and layoffs was passed in May 1997.

President Kim Dae-jung, who succeeded Kim Young-sam, had to promise layoffs to get support from the United States to overcome the foreign exchange crisis. The layoff conditions introduced in February 1998 after an IMF bailout were more disadvantageous to workers than the original revision. If the politicians had worked together and labor cooperated with management, Koreans would have endured less pain and won the trust of international investors.

The same goes for financial reform. In 1997, the last year of Kim Young-sam’s administration, he declared financial reform as a goal. Kang Kyong-shik, the deputy prime minister for economic affairs, and Kim’s economic adviser, Kim In-ho, were appointed to focus on financial reform after the bankruptcy of Hanbo Steel. The two were considered very reform-minded choices as the president had sent “starting pitchers” instead of “relief pitchers” into the ninth inning, so to speak.

But the financial reform bill failed to pass the National Assembly, and it became the critical reason Korea’s sovereign credit rating declined. If the labor and financial reform bills were passed in time, the fate of the nation — and the historical evaluation of Kim’s presidency — would have been very different.

Recently, an IMF team visited Korea for its annual meeting and issued a statement. The tone was gentle, as the IMF doesn’t address issues harshly and directly, but the message was clear: “The current growth momentum represents an opportunity for ambitious reforms” and will “require reforms to address rigidities in product and labor markets.”

The IMF asked for so-called “flexicurity,” an integrated strategy that enhances both flexibility and security in the labor market. As a flexible labor market means employment and termination are dependent on the management situation, the plan will require a solid safety net for the unemployed.

It is up to each country whether to take the IMF’s advice or not. But economic experts unanimously called for the need to reform the country’s labor market. Byeon Yang-kyoon, a former policy coordination director in the Blue House, is considered the hidden architect of current President Moon Jae-in’s economic policies. The report he submitted to the IMF called for expanding the country’s social security network and skimming excessive protections for permanent employment.

A deal maker throughout his life, Kim Young-sam wrote in his memoir, “Everyone wanted reform, but it was harder to deliver than revolution.”

Labor market reform is one of the hardest things to achieve. Kim wrote that it was “harder than a constitutional revision.” But there is no magic wand to enhance national competitiveness without addressing labor reform. Businesses instinctively move to places with higher productivity and better employment environments. French President Emmanuel Macron is focusing on labor reform even though it is unpopular because he wants to turn around France’s slow economy.

“If you miss the timing for reform, a crisis is sure to follow.” If Kim were still alive, it might be the piece of advice he would want to give to President Moon.

*The author is the international news editor at the JoongAng Ilbo.