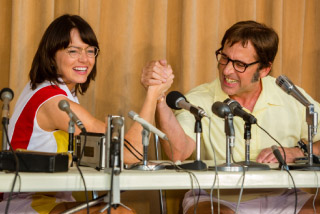 On a weekend morning, I watched “Battle of the Sexes,” a film about the journey of female tennis players fighting for their rights, as the top prize pot for women was far less than men when they competed in the same tournament. It is based on the 1973 match between Billie Jean King and Bobby Riggs. The title in Korean has been changed to “Battle of the Century.”

Then-29-year-old Billie Jean King was the best female tennis player. She defeated 55-year-old Bobby Riggs 3 to 0. After the match, the U.S. Open became the first major tennis tournament to eliminate the discrepancy between award prizes for men and women. Wimbledon was the last to start offering equal prize money, in 2007.

The movie raises various questions on sports and sex. What’s just as controversial as the gender discrimination is sexual assault in sports. There have been noteworthy moves in Korea and other countries on the issue.

In Korea, Kim, a victim of sexual assault in sports, came forward and started a similar movement. When she was 10 in the early 2000s, Kim was sexually assaulted by her tennis coach. She remained silent until she found out last year that the assaulter was still teaching children. In order to prevent further assaults, Kim sued the assaulter, who was sentenced to ten years in prison last month.

In the last five years from 2012 to 2017, more than 170 cases of sexual assault and violence have been filed with the Center for Human Rights in Sports under the Korea Sport and Olympic Committee. There could be many more that have not surfaced. When Billie Jean King wins the match, her colleague tells her that she has just changed the world. However, it took over 30 years for Wimbledon to change. Hopefully, Kim’s courageous act won’t be futile, and it won’t take as long to change the world. Now is the time to say “me too.”