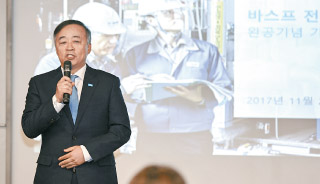 Shin Woo-sung, the managing director of BASF Korea, speaks during a press conference on Monday in Seoul. [BASF KOREA]

BASF Korea, the local unit of the German chemical company, completed the expansion of its local production plant to better cater to the growing need for electronics materials.

The chemical company said on Monday that it began the operation of its new electronics materials plant down in Yeosu, South Jeolla, where it will produce ultra-pure NH4OH, or electronic-grade ammonia water.

The company’s production facility in Yeosu is now capable of producing six different products, which include Ultrason, a thermoplastic that the company only produces in Germany and Korea. The Yeosu plant is the company’s seventh factory in Korea.

The ammonia water is used as a cleaning solution in the production of semiconductors and displays, according to Boris Jenniches, vice president of the company’s electronics materials business in the Asia-Pacific region, during a press conference on Monday in Seoul. The solution produced at the new plant will ensure a level of purity that will prevent the contamination of semiconductors and displays produced by local companies such as Samsung Electronics and SK Hynix, the vice president added.

“[Korea], it’s an attractive market in terms of the growth of semiconductor industry,” said Jenniches, who explained that the sector witnessed 15 percent growth in 2017 alone, although it may be underestimated given the fast development of related technologies in the sector.

The reason why BASF decided to open up an electronics material plant in Korea, according to Jenniches, is because, “investment in semiconductor during 2017 in Korea saw a tremendous jump [compared to the global average]. Also in 2017, Samsung overtook Intel in investment in information technology and is expected to outperform it by the year’s end.”

The company started its electronics material business in Korea in 2010, most of which was done through imports from Taiwan. In 2013, BASF moved the regional headquarters from Hong Kong to Seoul and in 2014, it established its regional R&D center in Suwon, Gyeonggi. The addition of the electronics materials production facility will complete the company’s “ecosystem” in Korea, covering everything from research and development and production to delivery to local customers, enduring the “fast and reliable supply” of components.

“Overall since 2013, we have done a sizable investment in Korea, which stands at around $50 million so far,” said Jenniches, who added the company hopes to expand the investment as well as size of the production as the demand for BASF products by local companies grows.