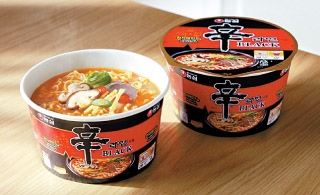 Nongshim has released an upgraded version of its Shin Ramyun Black’s cup noodles that can be cooked not only with hot water, but also in a microwave.

Nearly all cup noodles in Korea are made to be cooked with hot water. Heating them in microwaves, however, is a tip that is often shared in online communities as a way to enjoy the product easily and quickly.

“Conventional paper packages for cup noodles are made to endure water’s boiling point [of 100 degrees Celcius],” said a Nongshim spokesman. “In microwaves, the temperature goes well above that and in some cases this can cause the packaging to melt and substances from the paper can go into the soup.”

The paper package developed for the renewed Shin Ramyun Black cup noodle is capable of staying intact in such high heat, for which Nongshim acquired verification from the Ministry of Food and Drug Safety. Traditionalist cup noodle fans need not worry, as cooking with hot water is still an option.

Shin Ramyun Black is a variation of Nongshim’s flagship Shin Ramyun. The Black version uses a beef broth base for the soup.
Nongshim claim that the frequency of the microwaves causes vibrations that make the noodles chewier and the higher heat brings out more flavor in the soup.

Heat coming from all directions in a microwave also ensures the noodles are cooked evenly.

The first and main distribution channel for the new cup noodles will be in convenience stores. In fact, the rise of convenience stores — riding on the back in the growth of single and two-person households — was the reason Nongshim came up with the product.

“Over the last few years, there was a rapid rise in the number of convenience stores nationwide,” said a Nongshim spokesman. “This also led to the expansion of ready-to-eat snacks and food specialized for convenience stores which are most frequently reheated by microwaves.”

Another explanation is that the cup noodle market itself has grown and matured enough to show more diversity. According to Nongshim, the cup noodle market grew over 300 times in the last three decades to now account for 770 billion won ($708 million) this year. This accounts for 35 percent of the entire instant noodle market and the percentage is still growing.