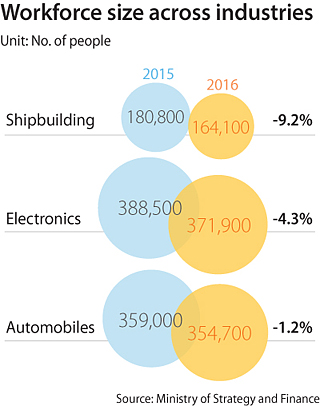 In the latest sign that Korea’s shipbuilding industry may be in for a longer slump, the sector’s workforce shrank 9.2 percent, the highest reduction among manufacturing industries last year, from 180,800 in 2015 to 164,100 in 2016, according to the latest figures released by the Ministry of Strategy and Finance on Monday.

The massive workforce reduction in shipbuilding stands in sharp contrast to high-tech industries like medical precision tools, which saw a 7.4 percent expansion from 79,800 workers in 2015 to 85,800 workers in 2016.

The shipbuilding sector, once the pride of Korean industry and a driver of the country’s development from economic backwater to technological powerhouse, has struggled since the 2008 financial crisis, when global demand for large vessels like cargo ships fell and competition from Chinese shipbuilders started growing.

The workforce reduction was reflected in shipbuilding output, which fell 7.9 percent in 2016 from 73.4 trillion won ($67 billion) a year earlier to 67.6 trillion won. Medical precision tools, on the other hand, posted an 11.8 percent increase in output, from 19.9 trillion won to 22.2 trillion won.

Shipbuilders like Hyundai Samho Heavy Industries, Hyundai Heavy Industries and Hyundai Mipo Dockyard have been sending their employees on leave without pay because they haven’t received orders, while the companies are being closely chased by rivals in other countries like China.

The workforce reduction is expected to continue next year as the number of new shipbuilding hires fell 20.2 percent in the second half of this year compared to the same period last year, according to the Korea Institute for Advancement of Technology.

To help local shipbuilders find new orders and raise their competitiveness, the government has allocated 6.5 trillion won in financial support for research and development this year.

Total output across all manufacturing industries stood at 1,418.5 trillion won in 2016, down 14 trillion won from the previous year.