Minister of defense gets an up-close look at border

Minister of defense gets an up-close look at border 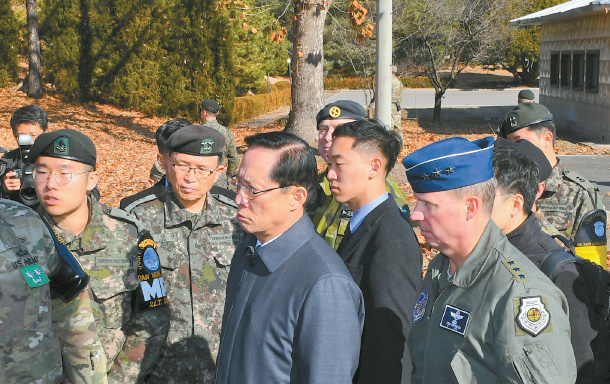 The American-led United Nations Command (UNC) determined last week that the North violated the truce twice on Nov. 13 by firing weapons across the MDL and when one of its guards temporarily crossed the line while pursuing the defector.

Song went as far north Monday as stepping inside the JSA security battalion’s guard post, which is right at the MDL, the first defense minister to do so.

As Song and his aides approached the MDL, three North Korean border guards showed up on the other side, the same place from which they fired at the defector two weeks ago.

Five bullet holes were visible on a building near South Korea’s Freedom House, some 55 yards south of the MDL, where the defector collapsed before South Korean soldiers dragged him to safety.

Song was accompanied by Lt. Gen. Thomas Bergeson, deputy commander of the UNC; Maj. Gen. Patrick Gauchat, head of the Swiss delegation to the Neutral Nations Supervisory Commission (NNSC); Rear Adm. Anders Grenstad, head of the Swedish delegation to the NNSC; and Col. Steve Lee, secretary of the UNC Military Armistice Commission, among others. South Korea’s military said Sunday it is broadcasting reports about the recent defection through loudspeakers near the border facing North Korea.

It is also describing the dire health conditions local doctors discovered in the soldier when they operated on him, as part of psychological warfare.

Dr. Lee Cook-jong, a trauma surgeon at the Ajou University Medical Center in Suwon, Gyeonggi, who is treating the 24-year-old defector, revealed that the soldier’s stomach was riddled with parasites, including roundworms, evidence of the North’s poor hygiene and malnutrition.

Also included in the broadcasts was North Korea’s violation of the Armistice Agreement.

The South Korean military believes that the announcements can be heard as far as 20 kilometers (12 miles) into the North, affecting frontline soldiers and nearby villagers.

A North Korean soldier who defected to the South last June claimed the broadcasts triggered his decision to escape.

North Korea has yet to mention anything about the defection, and has been generally low-key since its last ballistic missile test on Sept. 15.

Beyond Parallel, a database website run by the U.S. Center for Strategic and International Studies, which analyzes and predicts North Korea affairs, wrote last week that there was an “elevated likelihood” Pyongyang could carry out a provocation in the next 14 to 30 days.

That window includes Dec. 17, the date former leader Kim Jong-il died six years ago. North Korea has a history of celebrating important dates with a show of military might.