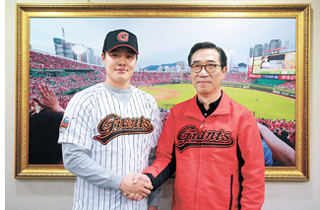 Min Byung-hun, left, poses for a photo after signing a four-year deal worth 8 billion won (＄7.39 million) with the Lotte Giants on Tuesday. [LOTTE GIANTS/NEWS1]

By signing a four-year deal with free agent Min Byung-hun at 8 billion won ($7.39 million), the Lotte Giants have brought three of the best outfield players the Korea Baseball Organization has ever produced — Jeon Jun-woo, Min and Son Ah-seop — together on the same roster.

“I want to play well for the Giants’ fans and the club, who recognized my value,” Min said. “I won’t get lazy just because I signed a contract. I’ll be the hardest working player on the team.”

Though the Giants still have a hole in the team — the loss of a veteran catcher and a weakness at third base — the addition of Min has raised expectations for a successful postseason bid now that the club has the KBO’s best batters.

Min, who made his KBO debut with the Doosan Bears in 2006, has a career batting average of 0.299 with 71 home runs and 444 RBIs in 1,096 games. After playing two seasons for the Korea Police Baseball Team, Min has been in the Bears’ batting lineup and managed to exceed a 0.300 batting average for five consecutive seasons. Aside from the impressive statistics, Min has never had a major injury despite playing in an average of 126 games each season.

In the most recent season, Min had a 0.304 batting average with 14 home runs and 71 RBIs. He may not be as fast as he used to be, but Min dominates in defense and still has a strong arm.

While playing for the Bears, Min played mostly as a right fielder, but occasionally moved into the center. However, since Jeon, the Giants’ center fielder, doesn’t have much experience playing in the corner and Son is more comfortable playing on the right, it is very likely that Min will be the Giants’ left fielder.

“I understand Lotte signed me to try to win a championship,” Min was quoted as saying on Yonhap. “I’ll do my best to address whatever shortcoming this team may have had, and I’d love to help the team to a title during my time here.”

The Giants have successfully overcome the loss of Kang Min-ho, the Giants’ former catcher, by spending the same amount of money on Min. On Nov. 22, the Samsung Lions announced they had signed Kang. Though the Giants offered the exact same amount, Kang ended up joining the Lions. As a result, the Giants worked hard to keep Son, making him the third highest FA signee in the KBO at 9.8 billion won.

“I’ve done well at Sajik Stadium and I knew this team needed some offense,” Min was quoted as saying on Yonhap. “And as a professional athlete, I know I am supposed to put in my best effort to live up to fans’ expectations.”

Since they have to compensate the Bears, due to KBO regulations, it is likely the total bill will exceed 20 billion won.

But the Giants’ investment may get a lot higher, as they still haven’t completed negotiations with their two remaining FAs, Choi Joon-suk and Lee Woo-min.

In the past, the team was often unwilling to indulge in the FA market, but have been making aggressive investments for the past three seasons, spending 47.6 billion won. Last season the club successfully signed Lee Dae-ho for 15 billion won, making him the highest-paid FA in the KBO.