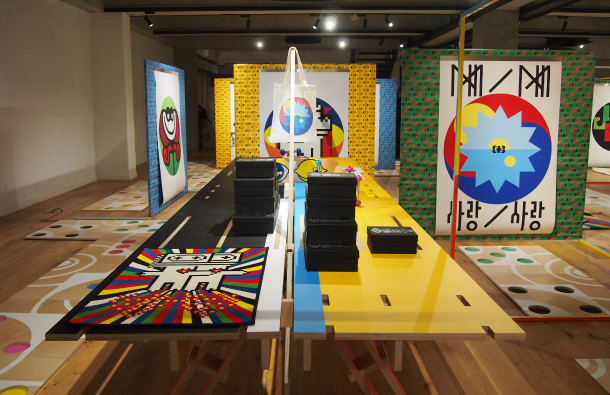 On display at the “M/M Aime/Aime” exhibition open in Hyundai Card Storage, central Seoul, are works by the French design duo M/M Paris, which transcends the borders of different genres. [YOON SO-YEON]

French design duo M/M Paris get their most creative and rich ideas from talking with each other and with everyone they meet and work with. Through communicating with their peers, Mathias Augustyniak and Michael Amzalag, the two designers of M/M Paris, find inspiration for what kind of a world to build within their work, which, put together, creates a shared language for everyone.

At the “M/M Aime/Aime” exhibition now open in Hyundai Card Storage in Itaewon, central Seoul, some 50 works created by the duo prove how their work is like a language that speaks on its own. Even though almost all of the exhibits are actually works that were created in the past for other projects, the poster that was designed especially for the Seoul exhibition hangs in perfect harmony with the rest of the works, as if the whole set had been created for a single collection, rather than separately. 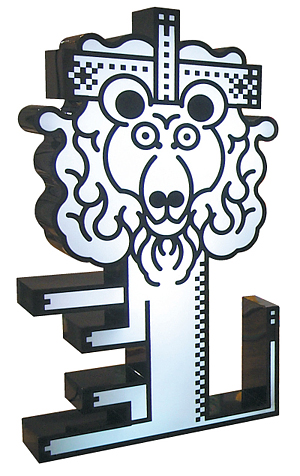 A plastic monument identical to one of the posters on display. [YOON SO-YEON]

“When we are working in this field, the creative procedure is based on questions,” said Augustyniak on Nov. 23, who came to look at how the exhibition had been put together. “With the series of conversations, we have been designing and building alphabets. We have been shaping the grammar, and inventing vocabulary with our work. For each project, the different grammar and vocabulary are put together.”

Each work, a poster, photograph or an object, therefore, can stand alone for a set purpose, but put with the duo’s other works, its meaning changes according to its surroundings. For instance, some of the posters were designed to be used as actual promotional posters for commercial events, such as theater productions. Yet, their appearance on the walls of the Storage gallery gives them a new identity as art.

This particular retrospective includes a new poster the duo designed for Korea, which took its influence from the Korean national flag. The poster takes its main form similar to the flag, then uses red, blue, white and black, but is amended to fit the M/M philosophy.

“It could look like your national flag, but with a closer look, it looks like an interpretation of the flag; it’s a way to announce this exhibition, ‘M/M,’” said Augustyniak. 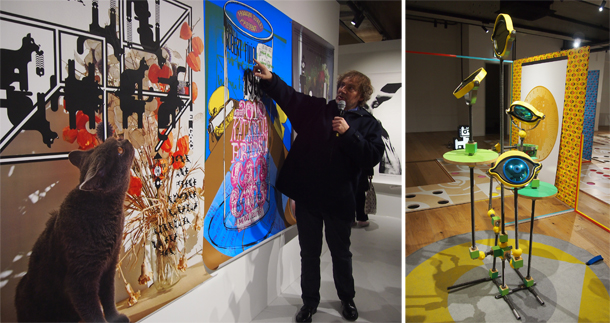 Above: Mathias Augustyniak, part of the design duo M/M Paris, explains his work on Nov. 23 at the gallery in Hyundai Card Storage in Itaewon, central Seoul. Right: the “Citronnier,” which symbolizes a modern-day lemon tree that performs different tasks according to the user’s needs. [YOON SO-YEON]

Other exhibits include the graphic illustration of 13 emojis - 13 because it’s half the number of letters in the English alphabet, and emojis because the visual language allows for universal communication - in a typography series named “The Alphabet,” which were created through collaboration with magazine photographers, a tree-shaped object named “Citronnier” and a large carpet that the duo dubbed “The Carpetalogue [Double Agent].”

A work called “Infinitable [Light Version]” has everyday objects strewn across it, which without explanation, looked trivial and meaningless.

Yet the objects, such as bags, skateboards and cardboard boxes, have been decorated with patterns similar to those used for other graphic posters, carrying a hint of the artistic world created by the duo. Through this, M/M Paris conveys how their artistic world exists in layers within the real world, and that it is not just a fantasy that only exists in the designers’ heads.

“This is like a visual proposal of our world, that I hope is pleasing to see at the same time,” said Augustyniak. “We have designed a garden in which you can stroll through, then look and hear things we’ve created through our conversations. We have produced some objects that are milked out of this world, which could be inserted in the world again, but decorated with signs that can be found in this garden.”