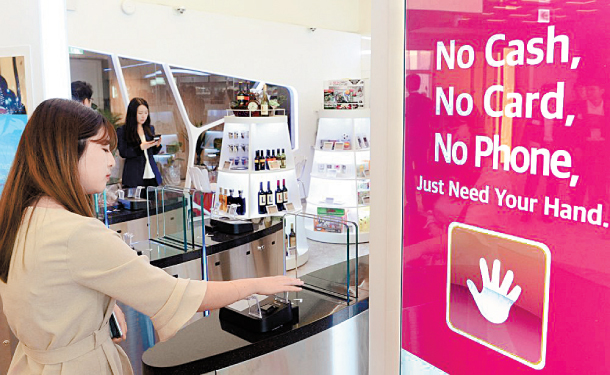 Lotte Group opened an unmanned branch of its convenience store franchise 7-Eleven at Lotte World Tower in May. [LOTTE GROUP]

Convenience stores across Korea are taking a dramatic step to minimize losses from the minimum wage rate hike expected next year - get rid of the staff altogether.

The new administration said the minimum wage rate in Korea will increase to 7,530 won per hour starting next year, a 16.4 percent boost compared to this year’s rate of 6,470 won per hour.

Korea’s No. 1 convenience store franchise CU, operated by BGF Retail, recently announced a self-payment app called CU Buy-Self which allows customers to scan the barcode of products with their smartphone and purchase them directly through the mobile app.

In May, 7-Eleven also opened an unmanned branch dubbed 7-Eleven Signature inside Lotte World Tower, where it allows visitors to purchase products with a mere scan of their palm. Payment is made through pre-registered credit cards.

“A rapid rise in the minimum wage rate inevitably leads to job cuts which can be replaced by automation and other technology,” said Choi Yong-hong, a professor at Korea University School of Law.

“In retail industries where there are a relatively high number of people associated with simple labor, the shift to automation and unmanned branches will accelerate,” Choi added.

BGF Retail’s latest CU Buy-Self app, expected to launch early next year, is considered the first step on the road to unmanned stores. 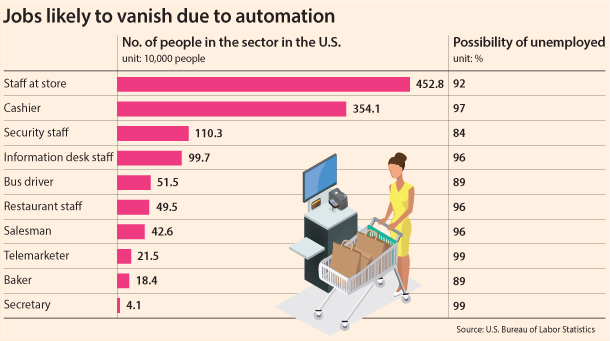 “For the store owner, such automation will be effective in reducing labor costs and increasing efficiency,” an official at BGF Retail said.

Currently, the self-payment app is only available for a test run at a branch located inside the NHN Entertainment headquarters in Bundang.

“It will later work together with a smart door and CCTV technology to achieve a completely unmanned convenience store,” the official added.

Shinsegae says the unmanned feature had a positive impact on sales as well.

According to an Emart24 official, its unmanned Jeonju National University of Education branch saw its sales increase by 43 percent between July and October compared to the period between March and June, when there was no automation service installed.

“After the branch went unmanned, we increased the portion of instant and frozen food products. And with the rising demand for such ready-to-eat products, sales saw an increase,” the official at Emart24 said.

Convenience and speed are another benefit of buying products at unmanned branches.

“I have become used to swiping my credit card in order to enter the convenience store and purchasing things by scanning the products’ barcodes,” said Yun Yeong-ji, an office worker who often visits another unmanned branch of Emart24 located inside the Chosun Hotel in central Seoul.

“Especially when I am buying sanitary products, it is convenient that I don’t have to face the staff,” she added.

The automation is not only confined to convenience stores, but is quickly expanding to book stores, post offices, gas stations and cafes, among others.

Unmanned gas stations are not a new thing, but the shift from manned to unmanned has accelerated lately.

According to Korea Oil Stations Association (KOSA), the number of unmanned gas stations in Korea as of January this year hit 2,275, 77 more than last year.

“The profitability for one gas station is near 1 percent. With the rising competition, the only way to earn more is to reduce the labor costs,” said Kim Moon-sik, head of KOSA.

“It is said that the minimum wage rate will increase by an average of 15 to 16 percent every year. If this trend continues, the portion of unmanned gas station will hit 30 percent soon,” he added.

“In the U.S., automation started in the fast food industry, but has expanded to finance and service segments,” said Lim Young-kyun, a professor of business administration at Kwangwoon University. “There is a report saying that hiring a single employee costs $38,500 while installing an automated device cost $35,000,” Lim added.

According to statistics by Korea Employment Information Service last year, 12 percent of the working population in Korea could be replaced by robots or artificial intelligence.