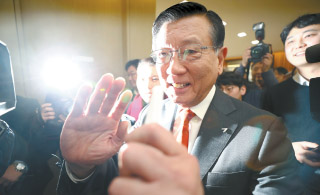 Kumho Asiana Group Chairman Park Sam-koo announced Tuesday he has no interest in reacquiring the troubled Kumho Tire and vowed to beef up the group’s performance by strengthening its construction and transportation arms instead.

“I am to be held responsible for the management aggravation of Kumho Tire,” Park said during an emergency press briefing held Tuesday at the company’s headquarters in Jung District, central Seoul. “I gave up on [acquiring] Kumho Tire and I just hope it meets a better acquirer and becomes a healthier company.”

Kumho Tire, which completed a creditor-led workout program at the end of 2014, had been suffering from deteriorating performance for the last two years. Park showed regret, saying a different history could have been written if Kumho Tire’s balance sheet had been better, and added that he is fully liable for the outcome.

He stressed that the group will now focus on three key affiliates for stable growth.

“We will make Kumho Buslines, Kumho Engineering and Construction and Asiana Airlines our major business pillars to lead the future growth of the group,” Park said.

The group’s holding company Kumho Holdings finalized a merger with Kumho Buslines on Monday. The Kumho-branded intercity transportation service provider is currently the No.1 local player in the industry and is expected to be a stable cash generator for the group.

“Now that the merger has been completed we have established a stable corporate governance structure with control going down from Kumho Holdings, Kumho Industrial, Asiana Airlines and our other affiliates,” Park added. “With the new group structure we hope to better contribute to the Korean economy.”

Park’s remarks draw a clear line against speculation that he might try and repurchase his beloved tire unit. He said he wishes the best for the employees of Kumho Tire who he worked with for more than 30 years.