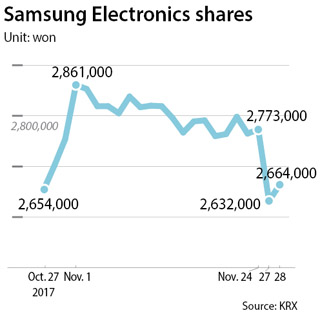 Samsung Electronics shares nose-dived after a pessimistic report from Morgan Stanley on Monday but quickly rebounded the following day amid mixed views over whether the tech giant has reached its limit.

Shares of the world’s top smartphone and second-largest chipmaker plunged 5.08 percent to end at 2,632,000 won ($2,427.94) on Monday, knocking a whopping 18.2 trillion won off its market capitalization. Foreign investors led the downward momentum, selling off 330 billion won worth of shares - the largest sale since Aug. 11.

The slump came after the New York-based financial services firm adjusted its view on Samsung from “overweight” to “equal weight” and slashed the share price target by 3.4 percent to 2.8 million won in a report on Sunday.

Shawn Kim, a senior technology analyst with the company, indicated in the report that his quantitative model predicts prices of NAND flash chips are peaking and DRAM memory prices will top out in mid-2018. He recommended that investors sell chip stocks three to six months before the price culminates.

“We think now is the time to reduce exposure to NAND [flash memory] and Asian semiconductor names as the industry has benefited from sizeable demand tailwinds and unprecedented pricing power, which we see reversing soon,” wrote Kim.

It is true that semiconductors make up a significant portion of Samsung’s earnings and a drop in the prices of memory chips, one of Samsung’s key products, could deal a huge blow. In the third quarter, the semiconductor division accounted for 68.5 percent of the tech giant’s entire operating profit.

However, most other brokerage houses still remain quite optimistic about Samsung. The target prices range from 3.1 million won to 3.8 million - up to 1 million more than what the American financial firm predicts - as they forecast the so-called supercycle in the chip-making industry would persist and Samsung’s continued commitment to improving shareholder value by boosting dividends.

In reflection of the still rosy outlook, Samsung shares bounced back on Tuesday to end 1.22 percent higher at 2,664,000 won. During the session, foreign asset managers continued their selling spree. UBS unloaded the largest number of shares at 36,490 while Morgan Stanley sold 35,610 shares.

Do Hyun-woo, an analyst with Mirae Asset Daewoo, said, however, that NAND’s average price from Samsung next year would fall 9 percent year on year but huge demand and robust supply from enlarged production facilities would propel operating profit from NAND by 39 percent on year.

Another analyst who asked to remain anonymous said it is not a good time to reduce tech shares, given demand for memory chips would remain sustainable from the upbeat global economy and big demand from smartphones, personal computers and data centers.

Morgan Stanley has previously come up with an off-the-wall price target for a Korean company - Celltrion, a pharmaceutical company on the tech-heavy Kosdaq. The company set Celltrion’s share target at 80,000 in its Oct. 18 report, less than half of the closing price on the trading day at 178,000 won. On Tuesday, Celltrion ended down 3.75 percent at 205,100 won.