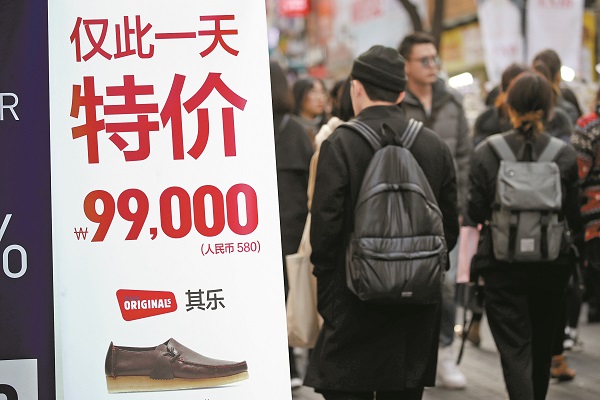 Signs in Chinese were recently set up in the Myeong-dong shopping district in central Seoul, as shop owners expect Chinese tourists to come back soon. [YONHAP]

Last year, the military selected the Lotte Skyhill Country Club in Seongju, North Gyeongsang, as the site for the Thaad battery because of its high altitude and easy accessibility for military vehicles. Earlier this year, the conglomerate handed over the property in return for real estate of similar value from the government, making it a main target of China’s economic retaliation.

“China lifted the tour ban for only Beijing and Shandong,” an industry source said. “This means they will lift the ban step by step depending on the situation.”

Although China never made an official announcement, Chinese travel agencies stopped offering group tours to Korea since March 15. The partial lifting of the ban came ahead of President Moon Jae-in’s visit to China next month. It also followed an agreement announced by foreign ministries of the two countries on Oct. 31 to improve the bilateral relationship.

“The Thaad issue is settled and the summit is coming, so China seemed to have expressed its sincerity with a partial lifting of the ban on tours,” a source in Beijing said Tuesday.

There are other signs that Beijing will be lifting unofficial economic sanctions which cost the Korean economy some 10 trillion won ($9.21 billion).

Korea and China will declare the start of a second-stage of negotiation to upgrade the two-year-old bilateral free trade agreement (FTA) next month, a senior diplomatic source in Beijing said Monday. “The announcement will be made by President Moon and Chinese

President Xi Jinping at their summit next month,” the source said during a meeting with Korean media correspondents.

After three years of negotiations, China and Korea officially signed an FTA in 2015. It, however, did not cover services or investments. The two sides agreed to begin negotiations over removing barriers in service and investments in 2017.

Those negotiations were jeopardized by the chill in Korea-China relations. The source in Beijing, however, said the Thaad controversy is “settled for the time being.”

But Chinese leaders continue to raise the issue. According to Xinhua News Agency, Xi pressed Moon on the issue during a summit earlier this month, urging him to “make a responsible decision on Thaad that stands the test of history.”

The diplomatic source in Beijing also said Monday, “We will hear good news soon,” regarding China’s economic retaliations.
During the third week of November, 27,668 Chinese individuals applied for visas to visit Korea, up 156 percent from the figure for last March, he said.