LG Twins fans have gathered outside Jamsil Baseball Stadium in southern Seoul to express their anger toward the club and newly appointed general manager Yang Sang-moon. What started as a one-man protest last Friday has grown to about a dozen die-hard fans that are voicing their disapproval of the management’s decision to release the club’s veteran players in order to create a younger team.

The main thing fans are demanding is Yang’s resignation. After serving four seasons as the Twins’ manager, from 2014 to 2017, Yang was appointed as general manager and Ryu Joong-il was named the new manager in October.

Under the helm of Yang, the Twins advanced to the postseason twice, in 2014 and 2016. Reaching the postseason in 2014 was quite an achievement as the Twins were ranked last in May that year. Yang has been pushing for a younger roster since he first joined the team. Though the Twins finished ninth in 2015, the players had successfully adjusted to their new younger squad and made it to the postseason the following year.

By signing free agent Cha Woo-chan for the 2017 season, fans expected the Twins to be stronger, but instead they ended up in the wildcard contest and ultimately finished sixth with 69 wins, 73 losses and two ties. The Twins were strongest on the mound, ranking first in the KBO’s team ERA at 4.30, but a weak batting lineup prevented the team from playing in the postseason. The young players didn’t meet expectations and it was the veteran players that led the Twins’ batting lineup. 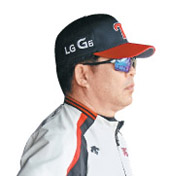 Despite this, the Twins released veteran hitter Jeong Seong-hoon right before the second KBO draft on Nov. 22, creating uproar in online fan communities. Despite getting only limited opportunities last season, Jeong managed a batting average of 0.312 with six home runs and 30 RBIs in 115 games.

In addition to Jeong, Son Joo-in, Lee Byung-kyu, Yoo Won-sang and Baek Chang-su left the Twins at the second draft. Rather than maintaining its veteran players, the Twins ended up adding three young, unfamiliar faces for the 2018 season.

“It was a decision made for a better generation change,” Yang said. “I plan to give more chances to the younger players.”

The fans don’t agree. Looking at the club’s recent history, the fans’ perspective is understandable. In 2015, outfielder Lee Jin-young joined the KT Wiz after getting excluded from the 40-man roster. In Lee’s first season with the Wiz, he managed a 0.332 batting average with ten home runs and 72 RBIs.

Not only that, another veteran player, also named Lee Byung-kyu, played in only one KBO game last season as the Twins didn’t give him much opportunity. In the Futures league, Lee’s batting average was above 0.400. He retired in July.

As the Twins failed to recruit any of the top prospects in the FA market this season, the fans’ anger has only grown. Though Kim Hyun-soo still hasn’t decided whether to return to the KBO, it’s uncertain if the Twins will make a big investment in the FA market.

Ryu’s success in rebuilding the Twins will strongly correlate with his term as manager, from 2018 to 2020. As there is only so much he can do with new additions, Ryu’s top priority has to be strengthening the existing players and preparing for a better performance next year, as the majority of the existing players are still young.