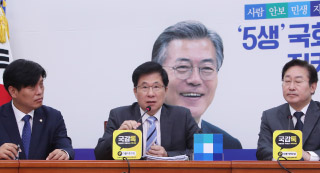 Lawmakers from the ruling Democratic Party hold an emergency meeting at the National Assembly in September to discuss “rooting out past ills.” [YONHAP]

“Reform” is bound to imply “revenge.” Attempts to correct an existing system will inevitably clash with the interests of those who created the system and benefit from it. The difference is the magnitude of resistance.

Each successive administration’s attempt at reform is often met with resistance and labeled as “political retaliation.” When a collapsing opposition party is wracked with infighting, it might be natural for them to vehemently resist a new administration’s reform drive.

For the entity pushing reform, it is the establishment’s resistance that should be eradicated. But reform is like electricity: the greater the resistance, the lower the efficiency. In the process, unnecessary heat is produced that is not only wasteful but also runs the risk of combustion.

Therefore, the success of reform depends on minimizing resistance, which is why some say reform is harder than revolution. Revolution has the power to physically subdue resistance; reform does not.

The current administration was the result of a candlelight revolution, but it was not the principal agent of revolution. Strictly speaking, it caught a free ride on the passions of a civil revolution but does not carry revolutionary force. Thus, the administration must focus on reform, not revolution. Resistance should be minimized, and the connotation of revenge diluted.

The method is quite simple: the government should pursue reforms that it can carry out. If the administration defines the failures of previous presidents as “past ills,” it will only fuel resistance and lose the confidence of the people. Some of the current administration’s appointments for top government posts have generated controversy because of their lacking qualifications and personal connections.
The Nobel Prize-winning poet Joseph Brodsky once wrote, “Evil takes root when one man starts to think that he is better than another.” The Soviet writer, who spent the latter half of his life in exile in the United States, said that all poets had a tendency toward dictatorship, thinking they know more than others and trying to rule their minds. When a poet with a pen feels so mighty, it is not surprising that those with real power want to rule the minds of others.

As the danger grows, people become practical. Whenever the sword is taken out, Brodsky’s writing should be cited as mantra. Only then can the sword be brandished properly without being affected by evil spirits.

Bigotry is believing one is better than others. The open-minded Irish independence leader Daniel O’Connell warned of this danger and persuaded the Irish people who were sticking to Gaelic to use English because it would help them gain independence.

“Bigotry has no head and cannot think, no heart and cannot feel,” he said. “When she moves, it is in wrath; when she pauses, it is amid ruin . . . and if she stops for a moment in her infernal flight, it is upon a kindred rock, to whet her vulture fang for a more sanguinary desolation.” Such a thought is frightening.