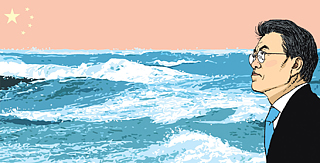 We have long endeavored to maintain a complementary relationship and co-existence with China through communication. But China has turned more assertive and full of pride as it builds its economic power and global influence. President Xi Jinping, who has started a second five-year term without no designated successor, wields mighty power and is accelerating his campaign to make China the world’s mightiest nation through a more assertive and nationalistic agenda.

The ascent of China comes as the world undergoes a transitional period in the global order. The multilateral diplomatic platform on which smaller states had a say, albeit modest, has weakened. Instead, the two superpowers wage a fierce power competition and define international affairs through bilateral diplomacy. It raises questions whether diplomatic skills can overcome limits in national prowess. China has become more difficult than ever at such a critical juncture.

We face a period of Chinese hegemony in which we must somehow find the means to overcome the gap with Chinese values and defend our national interests against domination. China is not the country that it used to be at the end of the 19th century and in the 20th century. Beijing will fully employ its newfound power to strengthen its identity and force its standards on others. It will try to put pressure on Korea by exploiting our short temper. Conflict is inevitable, and at times we may have to give in. No matter what hits us, however, we must not waver or resort to self-pity, lest we make poor decisions about our future.

We must remember that China is innately two-faced. It is weak against the strong and strong against the weak. We must never appear weak. We should be bold and patient with China to steer the relationship into a bigger context with a longer perspective.

In dealing with a stronger counterpart, the weaker party must strike a balance between sovereignty and self-consciousness. We must try to find a balance between the two under whatever circumstances. Policy makers must not repeat the mistake of falling into China’s trap in a shortsighted way. China pampers visiting state heads with glamorous receptions to get what it wants. When those leaders return home, they often realize they have come back empty-handed. Four years ago, President Park Geun-hye was given China’s red-carpet treatment when she visited Beijing. But she got little in return for the national interests.

President Moon Jae-in must use next month’s state visit to China as a turning point in bilateral relations by addressing a wide range of pending issues involving North Korea, Beijing’s mixing of political and economical matters, and deepening economic and industrial cooperation. Moon must fully employ his resolute rhetoric packaged in refined manners to stand up to Xi. If he comes off as weak or gullible, Seoul could be dragged and shaken by Beijing. In the longer run, we must beef up our economic and national power to maintain balance in bilateral ties.

Beijing has recently been playing the bully with Seoul because of our weakened leverage in bilateral relations. China’s reliance on Korean technology and products has lessened thanks to fast advances in its own industrial capacity and technologies. The imbalance in national interests could pose more challenges in bilateral ties.

The Moon administration must accelerate industrial structural reforms neglected by past governments. It must change its mindset first. It must place practicability ahead of ideology. The government must remove regulations and use all of its available resources to promote new technologies and industrial innovations. It must bring together employers and workers towards that goal.

Korea must gradually bring down its export reliance on China by strenuously diversifying its export markets to reduce corporate and investment risks in China. To overcome the China risk, we must keep up our national dignity and values for self-defense. The people must be united to support the president so that he can come home with success from his visit to China.