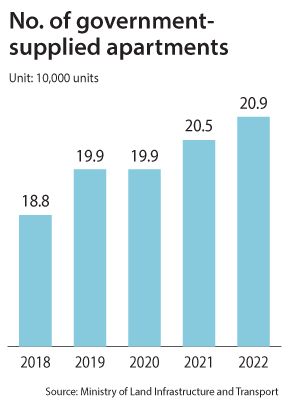 The government on Wednesday unveiled the details of its plan to supply 1 million apartments to the socially vulnerable including young people, newlyweds, people aged over 65 and low-income families over the next five years.

The government plans to supply 850,000 low-rent apartments while 150,000 will be sold to interested buyers.

Among the 850,000 units, 650,000 are apartments leased by the government while the remaining 200,000 units are owned by private companies or owners that receive government support. The government plans to supply 280,000 apartments over the next five years on long-term leases so that low-income families can live in them for 30 years or more.

The number of low-rent apartments being offered is relatively higher compared to past governments.

Many of these apartments will be built in the greater Seoul area, where there’s a huge demand.

“Past policies were fragmented as they approached [the supply of affordable and low-rent apartments] from the suppliers’ viewpoint,” said Land Minister Kim Hyun-mee on Wednesday. “From now on we plan to provide customized packages that comply to the person’s income level and their life so that the housing welfare road map can act as a bridge for those from low-income families to move up to the middle income bracket by getting a job, getting married and having children.”

The supply of government-owned low-rent apartments under the Moon Jae-in administration is more than those provided by the two conservative administrations.

The Lee Myung-bak government between 2008 and 2013 supplied an average of 90,000 units annually during its term, while the Park Geun-hye administration between 2013 and 2017 provided 110,000 units on average annually.

Half of the apartments, or 410,000 units, will be supplied exclusively to low-income families, including those living on government subsidies. Among the figure, 270,000 apartments are owned by the government while 140,000 will be provided by the private sector.

The government has also stepped up its financial aid to the future residents of these apartments including allowing younger people to take out loans for lump-sum deposit contracts, or jeonse.

Previously the government only allowed those who are aged over 25 to borrow such loans, but the government has eased the regulations to allow even those aged 19 and over to apply.

One of the interesting new measures is exchanging apartments owned by older people with no income for pension-like installment payments. The apartment will be purchased by the government, remodeled and leased to younger people. The original, older resident will be given a low-rent government apartment as well as payment for the original apartment in installments similar to a pension.

For example, if person over the age of 65 sold an apartment for 300 million won, they would receive an average 1.47 million won every month for the next 20 years.

One of the reasons the government has been aggressively pushing to supply affordable apartments is because of high property costs. According to Statistics Korea, as of 2016 the number of households that own their home has dropped from 56 percent in 2015 to 55.5 percent.

Only 11 percent of people aged 30 or younger owned an apartment, which is a 3 percentage point drop from the previous year.