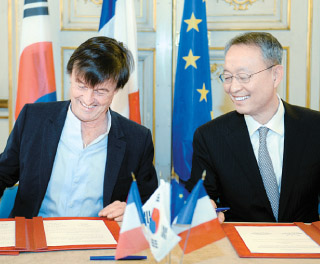 On furthering reactor dismantlement cooperation, the two countries signed memoranda of understanding during Energy Minister Paik Un-gyu’s meeting with his French counterpart Nicolas Hulot in Paris, a deal that comes as the Moon Jae-in government is pushing to wean the country off nuclear power.

“The two countries shared the understanding that national-level cooperation on energy sources will be vital as the use of renewable energy will be more prevalent in a departure from the past during which states often waged war over traditional energy sources such as oil and natural gas,” said the Ministry of Trade, Industry and Energy on Wednesday.

Under the joint agreement, the two nations plan to hold a director-level meeting on energy cooperation that will discuss issues ranging from renewable energy, smart grids, energy efficiency to nuclear plant decommissioning next year, though the meeting venue has yet to be decided.

For nuclear reactor decommissioning, the state-run Korea Hydro and Nuclear Power signed a memorandum of understanding with the state-controlled Electricity of France and nuclear power company Areva to share and work together in developing decommissioning-related technology.

The two MOUs come as Korea is preparing to decommission the Kori 1, Korea’s first indigenous nuclear reactor that was in operation from 1978 until June this year, when the Moon Jae-in government ordered it be unplugged. The 39-year-old Kori 1 is Korea’s first nuclear reactor to be dismantled, and it will take between 15 and 20 years before the work is done.

Nuclear power in France accounts for about 77 percent of the European country’s total energy supply. France aims to close as many as 17 nuclear reactors by 2025. France operates 58 nuclear reactors, supplying 437 TWh of electricity in 2015, according to the World Nuclear Association.

The bilateral commitment on developing clean energy technology and sharing nuclear plant decommissioning knowledge comes against the backdrop of the Korean government’s ambitious green energy initiative to raise the amount of power generated in the country by renewable sources to 20 percent by 2030. Currently, renewable energy makes up just 4 percent of the country’s power supply, while nuclear energy comprises nearly a third.

The government has been adamant about phasing out the country’s nuclear reactors, with the goal of reducing the number to 14 by 2038 from the current 24. It will only continue with construction of four reactors, two of which are nearly complete and two of which are about 30 percent done.