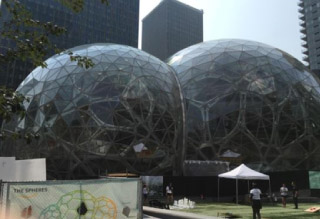 Amazon’s Biospheres under construction at its headquarters in Seattle. [YONHAP]

The rush of cities eager to attract the world’s biggest e-commerce company’s second headquarters has concluded. The application deadline was Nov. 19, and 238 cities in the United States, Canada and Mexico submitted a proposal. Amazon will review the proposals and will make its decision by the end of next year.

From Rockdale, Texas, a town with a population of 5,000, to Anchorage, Alaska, each city made a passionate proposal explaining what it can offer, and the effort is noteworthy in many ways.

Having an Amazon headquarters is not necessarily positive in every way. Apartment List predicted that once Amazon moves, some cities will experience a drastic increase in rent due to a shortage of housing supply. Raleigh, North Carolina, expects a 1.5 to 2 percent increase in monthly rent prices every year. San Jose, Pittsburgh, and Baltimore estimate an annual increase of 1 to 1.6 percent, 1.2 to 1.6 percent and 1 to 1.3 percent respectively.

Seattle, home of Amazon’s headquarters, has already experienced it. The rent hike resulted in more than 10,000 homeless people in King County alone. The rate of increase in Seattle is more than double the city that came in second.

Also, an urban economy model of overly relying on one company could be dangerous. The New York Times reported on an old Seattle, saying that in the 1970s, the people of Seattle suffered from the flu whenever Boeing, an aircraft manufacturer based in the city, sneezed.
But cities made aggressive attempts to lure Amazon because of desperate economic situations. Cities that do not meet the company’s conditions of having an international airport, public transportation, colleges and universities, culture and a suitable population also submitted a proposal.

The proposals are not short reports. Kansas City Mayor Sly James gave 1,000 products on Amazon five-star reviews personally. The Merrimack Valley, a joint application of five towns in Massachusetts, sent a fake diamond ring to Amazon and asked “Will you marry me?” The night before the application deadline, the Empire State Building and One World Trade Center went orange, representing Amazon, in support of New York’s bid.

The small business owners in Anchorage, Alaska went to Seattle’s Amazon headquarters in person and submitted the application. Meghan Stapleton, one of the business owners submitting the bid, said that they know Anchorage does not fit the qualifications but wanted to show the strength of the city so that it can attract other companies, even if it can’t bag Amazon. Are Korean cities willing to make such desperate attempts to bring in top companies?