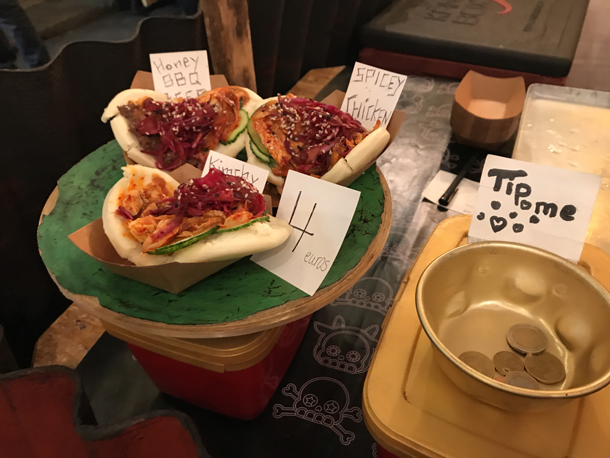 Kimchi buns are sold at the Street Food Thursday market at the Markthalle Neun in Berlin on Nov. 23. [SEO JI-EUN]

Still associate kimchi with kimchi jjigae or kimchi fried rice? There a lot more dishes out there made from Korea’s favorite side dish.

A study released on Wednesday by the state-run World Institute of Kimchi showed restaurants across 45 cities in 13 countries across the globe - including the United States, China, Japan and Germany - serve 63 different dishes based on kimchi.

The institute, based in Gwangju, is a think tank devoted to studying the benefits of the Korean side dish, developing diverse products and helping local kimchi producers enter overseas markets.

Predictably, kimchi jjigae, fried rice and pancakes are the most popular dishes abroad.

Kimchi pancakes, or kimchi jeon, are available at 47 restaurants, or 17.3 percent.

Thirty-nine spots, or 14.4 percent, served kimchi as a paid side dish, unlike in Korea where kimchi is generally free and served alongside most dishes. Each restaurant surveyed may serve multiple kimchi-made dishes.

There are also a variety of fusion dishes that make use of kimchi, the research showed.

Twenty three restaurants, or 8.5 percent, served bowls of rice with toppings made of kimchi and 21, or 7.7 percent, offered french fries with kimchi toppings.

Sandwiches containing kimchi were available at 12 diners and nine restaurants offered kimchi burgers. The kimchi toppings were combined with popular condiments such as mayonnaise, aioli and Sriracha.

Among the more peculiar dishes were kimchi hotteok, filled fried dough similar to a donut that typically contains brown sugar and nuts, as well as waffles, fried chicken, tacos and quesadillas.

“Unconventional attempts abroad at inventing menus made of kimchi that are barely seen in Korea appear to have been made possible from the fact that the creators do not have a fixed idea of kimchi,” said Ha Jae-ho, head of the institute.

“We intend to take a more strategic approach to kimchi cuisines customized for various local markets by combining different food cultures from around the world.”

The pungent Korean fermented vegetable is often cited alongside yogurt, sauerkraut and kefir as being especially good for the gut due its high level of probiotics and antioxidants.