SK Innovation cashes in by branching out

SK Innovation cashes in by branching out 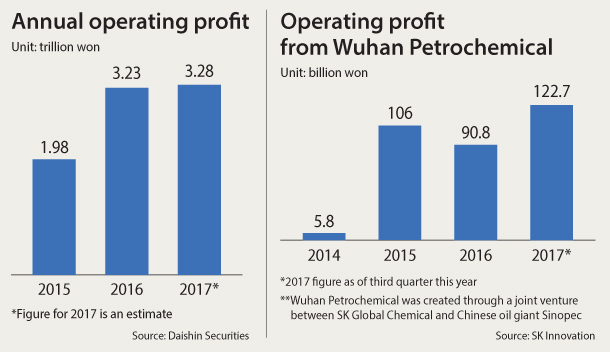 SK Innovation’s efforts to diversify its business portfolio are likely to bear fruit soon, as the company’s chemical and lubricant businesses are set to rake in nearly half its operating profit for 2017 by the year’s end, according to estimates by market watchers.

In a report released earlier this month, Yoon Sung-no, a researcher from Daishin Securities, projected that SK Innovation will record 3.28 trillion won ($3 billion) in operating profit for the year. Of the estimated figure, about 1.5 trillion won will come from the company’s chemical arms, while 486.0 billion won will be generated by its lubricant businesses. In particular, the chemical businesses are likely to experience a 20 percent year-on-year jump, according to the researcher.

Other market watchers shared similar analyses. Rho Woo-ho, an analyst from Meritz Securities, predicted on Wednesday that SK Innovation will reel in 1.45 trillion won from chemical divisions and 461 billion won from the lubricant sector.

“[The company] has secured portfolio diversification and growth potential through [recent] mergers and acquisitions as well as investment into new businesses,” Rho explained.

Portfolio diversification was at the core of SK Innovation’s agenda this year, according to its president and CEO Kim Jun, who said in May that the company will expand the share of non-oil businesses to as much as 70 percent and move away from relying too much on its oil refinery unit.

This year alone, the company completed two acquisition deals with Dow Chemical, the largest petrochemical company in the United States.

In February, the oil giant’s chemical arm SK Global Chemical took over an ethylene acrylic acid unit from Dow. The unit was fully handed over to SK as of September 1, and its sales will be fully reflected on the company’s balance sheet for the second half of this year, according to market insiders.

Also later in October, the chemical unit of SK Innovation signed a deal to acquire a polyvinylidene chloride business from the American company. According to a spokesperson, SK Innovation is expecting the newly acquired businesses to be a steady cash generator in the near future.

Previously, SK Global Chemical created Sinopec-SK Wuhan Petrochemical in China, which was established in 2014 through a joint venture between SK and Chinese oil giant Sinopec. SK Innovation holds a 35 percent share of Wuhan Ethylene through its chemical unit.

“SK Innovation has earned an operating profit of 325.3 trillion won from the first quarter of 2014 to the third quarter of this year,” said the company spokesperson.

The company and its partner in China recently invested 760 billion won into Wuhan Petrochemical to revamp the production plant after it reached full capacity last year. SK Innovation explained that the company and its Chinese counterpart will expand the production to three million tons of chemical products a year by 2020, making it one of the biggest chemical companies in China.

“SK Innovation has ensured future growth momentum through mergers and acquisitions this year,” explained Cho Hyun-ryul, an analyst from Samsung Securities, who added that the company is likely to push for more acquisitions in the battery business.