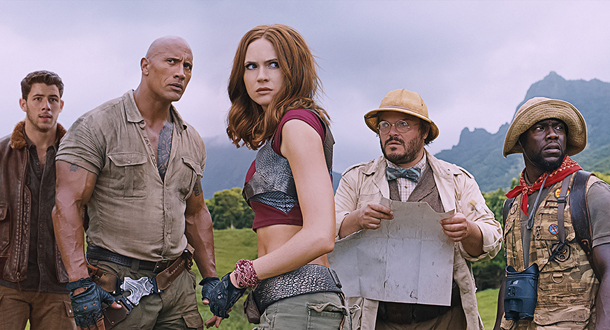 The sequel to a beloved movie always causes concern among fans of the original, and “Jumanji: Welcome to the Jungle,” was met with its fair share of suspicion after its production was announced.

But bucking concerns, critics have heaped praise on the fantasy comedy following the first screening which was held in Hawaii earlier this month.

Prior to the domestic release of the film, about a group of teens who get transformed into video game characters, three of its stars, Dwayne Johnson, Jack Black and Kevin Hart, met with Korean press earlier this week.

Directed by Jake Kasdan and revolving around four high school students, the film unfolds as they discover an old video game console called Jumanji. They are immediately brought into the game’s jungle setting, becoming the game characters they selected: the meek Spencer becomes a brawny adventurer (Johnson), a football player turns into a diminutive Brainiac (Hart), the popular girl Bethany becomes a middle-aged male professor (Black) and wallflower Martha (Karen Gillan) becomes an Amazonian warrior. Together, they strive to return to the real world, which in the process changes the way they think about themselves.

“A cool message in the movie is not to judge people [based] on their appearance but to see their heart,” said Black about the film.

Johnson added that an interesting element of the film is that there’s a tremendous amount of compassion. Being a high school student entails going through lots of struggles like peer pressure, but the film delivers a heart-warming message that illustrates how teenagers put their egos aside, work together and become good friends, according to the actor.

Of the main characters, the one that has intrigued audiences the most is Bethany, who becomes a man when she enters the game.

Though it sounds like it would be challenging, the gender-swapped role was one of the reasons that motivated Black to join the film.

“It’s a stretch. It’s far away from who I am. But it was a good chance to explore the teenage part of myself, and I knew how to play it,” said the actor.

Regarding the possible controversy that the gender flip element could bring, Black explained that the director had been “amazingly sensitive” and “took a very careful path not to offend anybody” while still managing to be funny.

Black also mentioned that he misses the cast and crew from the MBC entertainment show “Infinite Challenge,” on which he appeared during his visit to Korea last January. He added that he is currently learning Korean and hopes to come back.

“This is a family movie, a movie for everybody. It’s got a great message and there are things people can walk away with,” said Hart and added, “The movie brings out the best in these particular individuals.”

The 118-minute film, rated 12 and above, is scheduled to come to local theaters on Jan. 3.