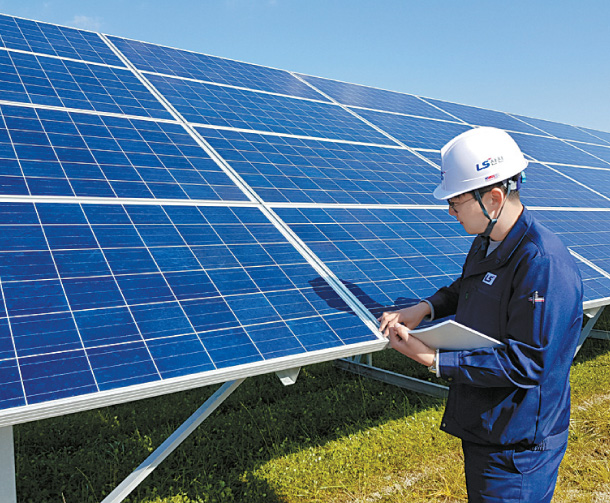 LSIS participated in the Korea Electric Power Corporation’s first foreign solar energy project: installing a 28-megawatt photovoltaic power plant in the city of Chitose in Hokkaido, Japan. The success of this project is expected to bring additional work for LSIS.

“It is extremely meaningful that LSIS, along with the Korea Electric Power Cooperation, built the largest photovoltaic power plant in Hokkaido with Korean technology,” Koo Ja-kyun, chairman of LSIS, said during the completion ceremony in Chitose. “We are planning to spur efforts to enter the global market using this project’s success as a stepping stone. LSIS aims to excel in not only the field of renewable energy but also in the smart energy industry.”

For this project, the Korea Electric Power Cooperation spearheaded business planning and investment, holding an 80 percent share in the plant. Thirteen Korean companies participated in the project.

LSIS was responsible for engineering, procurement and construction and will take charge of operations and maintenance for the next 20 years. The total contract was worth 9.7 billion yen ($87 million).

Construction took place between April 2016 and October 2017 and cost about 11.3 billion yen. The plant and is equipped with a 17-megawatt power control system and 13.77-megawatt battery.

“The electricity produced will be sold to Hokkaido Electric Power for 40 yen per kilowatt-hour for the next 20 years through a power purchase agreement,” LSIS said.

The company’s other solar projects in Japan include the Mito Newtown Mega Solar Park and Hanamizuki Solar Power Plant.

In 2015, LSIS supplied 156,840 solar panels and other equipment such as transformers and ring main units to the 40-megawatt Mito Newtown Mega Solar Park power plant in Ibaraki Prefecture. LSIS has also been contracted to build and operate a 4.55 billion yen, 18-megawatt power plant in Hanamizuki, Ishikawa Prefecture.

“Japan is a market where high credibility in technology is required because of strict quality standards, just like in the United States and China,” an LSIS spokesperson said. “As we received approval for our excellent quality and business ability in the Japanese market, we expect to gain tangible outcomes in other foreign markets in the near future.”

The firm expects the market to grow to 73 gigawatts next year.