[Sponsored Report] Lotte is getting Korea ready for the Olympics

[Sponsored Report] Lotte is getting Korea ready for the Olympics 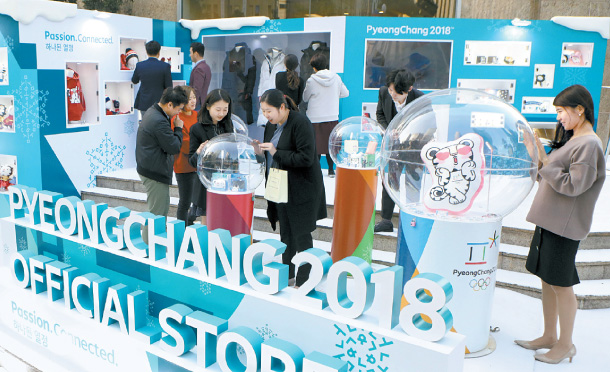 Lotte Department Store was designated the official department store of the 1986 Asian Games and 1988 Seoul Olympics and successfully introduced the world to Korean distribution culture. The company is now officially sponsoring the PyeongChang 2018 Winter Olympics.

Approximately 6,000 employees from the 56 branches across the country have become official spokespeople for the international sporting event, which begins in less than three months.

Interior and exterior decorations at Lotte Department Stores have incorporated the PyeongChang 2018 Winter Olympic mascots Suhorang and Bandabi. Branches nationwide have been decorated under the theme of “Joyful Christmas with PyeongChang 2018.” Bulletin boards and ornaments inside the stores feature the mascots of the Olympics and Paralympics.

Since Nov. 1, Lotte Department Store in Myeong-dong, central Seoul, has set up promotional booths and exhibitions in front of each location to advertise the upcoming Winter Olympics.

Customers can take photos with cut-outs of Suhorang and Bandabi and learn about PyeongChang Olympics-related products designed by Lotte Department Store. In the brand’s Avenuel store next door, a photo exhibition featuring the members of the national team taken by photographer Lee Myoung-ho is being held. A promotional video for the Winter Olympics is being continuously played outside of the Lotte Young Plaza location across the street.

Through membership events, 1 percent of every purchase over 10,000 won ($9.29) is donated to the national team by the store.

Kang Hee-tae, CEO of Lotte Department Store, said “For a successful PyeongChang 2018 Winter Olympics, Lotte Department Store is taking advantage of its strongest point of having various distribution channels to promote broad-scale marketing. All the executives and staffs consider themselves promoters of the event, and are taking initiative in supporting the PyeongChang 2018 Winter Olympics.”