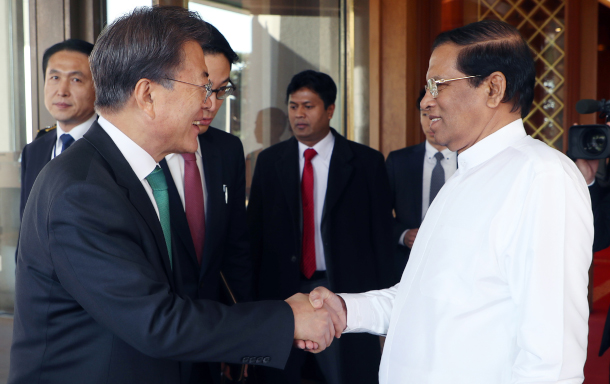 President Moon Jae-in, left, sees off Sri Lanka’s President Maithripala Sirisena, right, after they had a bilateral meeting at the Blue House on Wednesday. [YONHAP]

The leaders of South Korea and Sri Lanka agreed Wednesday to enhance their economic and diplomatic cooperation and peacefully resolve the North Korean nuclear issue.

The agreement came during a summit between President Moon Jae-in and his Sri Lankan counterpart, Maithripala Sirisena, held at the Blue House. Moon expressed gratitude for what he called Sri Lanka’s support and cooperation in dealing with the North Korean nuclear issue, the Blue House said in a press release.

The meeting came hours after the North launched what appeared to be an intercontinental ballistic missile in its first armed provocation in 75 days. “Our government is actively pursuing the New South Policy that seeks to ensure peace and co-prosperity of a joint community through cooperation with Southeast and Southwest Asian countries,” Moon said. “As Sri Lanka is an important partner in our New South Policy, I wish the two countries will pool their wisdom and strength to ensure peace not only in Sri Lanka but our entire region.”

Sirisena said his country will continue to fully implement UN Security Council sanctions against North Korea. The Sri Lankan president also expressed support for the PyeongChang Winter Olympic Games to be held here early next year, calling it a great opportunity to “reduce tension and establish peace on the Korean Peninsula,” the Blue House said.

Sirisena arrived here Tuesday on a three-day state visit. Wednesday’s summit also followed a friendly meeting between the two leaders on Tuesday, when Moon accompanied Sirisena on a brief visit to a Buddhist temple in Seoul.

In their first bilateral summit, the two leaders noted their countries’ relationship has steadily developed over the last four decades since they established diplomatic ties in 1977, and agreed to continue building their cooperative relationship as partners for peace and prosperity.