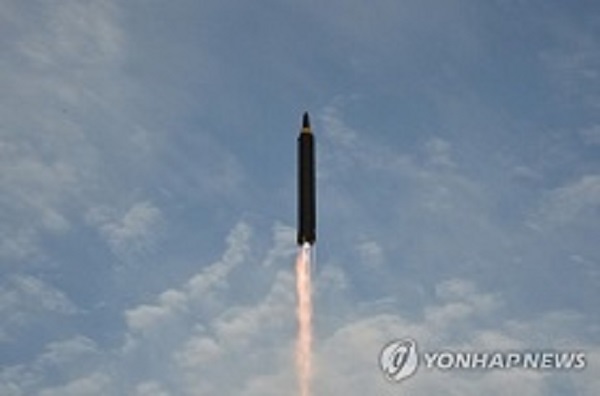 A Hwasong-12 ballistic missle North Korea flew across Japan on Sept. 15 in its most previous missile test. [YONHAP]

North Korea fired what appeared to be an intercontinental ballistic missile (ICBM) into the East Sea early Wednesday morning, breaking more than two months of silence from the Kim Jong-un regime.

South Korea’s Joint Chiefs of Staff announced that the missile, launched at 3:17 a.m. from Pyongsong, South Pyongan Province in western North Korea, flew nearly 960 kilometers (596 miles) after peaking at an altitude of 4,500 kilometers before landing in waters between the North and Japan.

Had it been fired at a normal angle, the missile could’ve flown more than 10,000 kilometers, said local military officials, which easily passed the 5,500 kilometer threshold to qualify as an ICBM.

Robert Manning, spokesman for the U.S. Defense Ministry, said the Pentagon’s initial assessment was that the projectile was an ICBM, but that it didn’t pose a threat to the U.S. or its allies.

The Japanese government claimed the missile splashed into its exclusive economic zone.

In an urgent National Security Council meeting at the Blue House, which began at 6 a.m. and ended 55 minutes later, South Korea’s President Moon Jae-in said he “strongly condemned” North Korea’s “reckless provocations,” adding that as long as the regime held on to its missile and nuclear development program, the international society, including Seoul, had no other choice but to increase sanctions and pressure.

Moon stressed that local authorities had already been aware of the missile test. The Blue House chief urged the South Korean military to be prepared for containing any North Korean threat based on the ironclad alliance with the United States, and “immediately punish” the regime in case it does carry out a provocation.

North Korea’s last missile test was on Sept. 15, when it flew a missile over Japan’s northern Hokkaido island. The regime has carried out 11 missile tests, including the most recent one, since Moon took office on May 10.