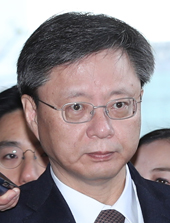 Prosecutors questioned one of former President Park Geun-hye’s closest aides Wednesday as a suspect involved in the alleged illegal surveillance by the spy agency on people deemed as obstacles to the previous government.

Woo Byung-woo, ex-senior presidential secretary for civil affairs, appeared at 10 a.m. for his fourth prosecution interrogation since he was implicated in an influence-peddling scandal that removed Park from office early this year, according to the Seoul Central District Prosecutors’ Office. He served in his post from 2015-2016.

“It’s my fourth time being here over the past year,” he told reporters. “If it’s my fate, I take it. And I think it’s also up to me to overcome it.” He said he would faithfully answer to the prosecution about his charges.

The 50-year-old former prosecutor was quizzed over his alleged involvement in the secret surveilling of influential public officials and civilians by the National Intelligence Service (NIS), including then-special presidential inspector Lee Seok-su.

Lee was one of those who first raised suspicions over the establishment of two foundations allegedly controlled by Choi Soon-sil, Park’s confidante and longtime friend at the center of the corruption scandal.

Woo is also accused of instructing the NIS and the culture ministry to keep a blacklist of artists and celebrities considered critical of Park or her policies and give them disadvantages.

The fresh allegations bring the possibility of charges of abuse of power and collusion in violation of the NIS law, the prosecution said.

Woo has been standing trial on charges that he overlooked and tried to cover up Choi’s meddling in state affairs. He is also accused of exerting power to block an investigation into the Park government’s handling of the 2014 ferry sinking that killed more than 300 passengers, one of the triggers that sparked moves for Park’s impeachment.

Prosecutors sought an arrest warrant for Woo twice in February and April this year, both of which were turned down by a court citing insufficient grounds, as he presents no risk of fleeing or of destroying evidence and the charges raised against him are disputable. He is about the only person left among those implicated in Park’s corruption scandal who has avoided arrest. It is likely that prosecutors will request another arrest warrant for Woo following the interrogation.