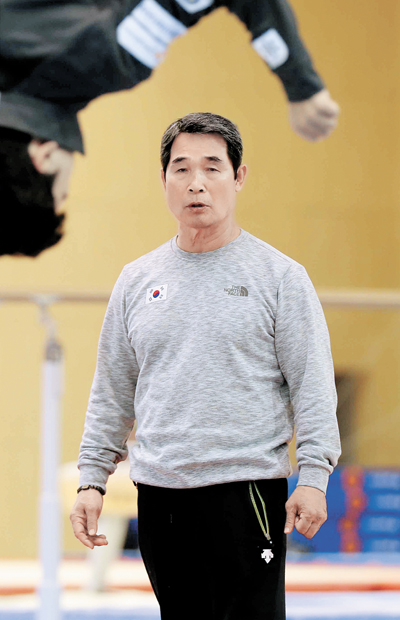 Aerial freestyle skiing is known as the “circus on the snow” at the Winter Olympics, but in Korea it’s still an unfamiliar sport that was only introduced two years ago. At the Jincheon National Training Center in North Chungcheong, three aerialists - Yoon Gi-chan, Kim Nam-jeen and Kim Kyoung-eun - train with the same trampoline and sponge floor that gymnasts typically use.

Since aerial freestyle skiing requires skiers to perform twists and flips in the air, athletes with a gymnastic background are at an advantage. Due to this, the Korea Ski Association (KSA) appointed Cho Sung-dong, who coached Yang Hak-seon at the 2012 London Olympics, to serve as the head coach of the Korean aerial freestyle skiing team when it was first created in 2015.

“I heard a lot of people say that aerial is similar to vault,” Cho said. “But since aerial requires skiers to jump straight up in the air and down, it’s more similar to high bar than vault.”

In aerial freestyle skiing, aerialists perform multiple flips and twists while about six meters in the air, before landing. Competitors are scored on their takeoff, jump form and landing. The degree of difficulty is then taken into account to calculate the final score.

Since the sport is very new in Korea, there still isn’t a training facility for the aerialists. As a result, Korean athletes train on trampolines, made for gymnasts, to learn the movements. The national team headed to China, where they have water ramps that allow the athletes to land in a large swimming pool. After training in China the team left for Mongolia to train on an actual slope.

Kim Nam-jeen and Kim Kyoung-eun are former gymnasts while Yoon switched to aerial skiing after competing in moguls. All three racers weren’t top ranked athletes, but in order to have a shot of competing at the Winter Olympics, they decided to change sport.

And their hard work has paid off. Kim Kyoung-eun finished 20th out of 26 aerialists at the FIS World Cup Freestyle Ladies’ Aerials in Phoenix Snow Park in Pyeongchang, earning a spot at the 2018 PyeongChang Winter Olympics.

As Kim Nam-jeen finished 24th out of 32 competitors at the men’s event, he has increased his chance of earning a spot at the Olympics. Kim needs to earn 0.6 points more at the FIS World Cup event next month to compete at the Winter Olympics in February.

But unlike the other two, Yoon faces an uphill struggle - he is still four points off qualifying.

“I feel like a student who’s enrolled in a college of music without knowing how to play the piano,” Yoon said. “There are times when I regret that I didn’t learn gymnastics. But I won’t give up. I’ll continue to challenge myself.”

Of the three aerialists, Cho put the most effort into helping Yoon.

Since Cho’s time as the head coach of the Korean national gymnastics team, Cho likes to focus on the basics. He believes that winning the men’s team gold medal at the 1994 Asian Games was the most memorable achievement of his career.

“After selecting high school students as national team members, I made them swing back and forth on a high bar the entire day,” Cho said. “At the time, the members of the Korean Gymnastic Associations were very worried but after making them do that for a few months, they learned the other skills a lot quicker. Basics are the most important thing before learning other skills. I teach them the basics based on what they need to achieve as their final goal.”

Sometimes the other aerialists were frustrated by the slow pace, but Cho won’t budge.

“I think I’m the only person to coach both the summer and the winter Olympics,” Cho said. “For the responsibility of making Korean history in the aerial ski jumping, I’ll try my hardest.”