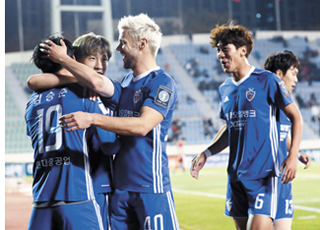 Ulsan Hyundai players celebrate after scoring a goal against Busan IPark FC in the first leg of the Korea FA Cup finals at Gudeok Stadium in Busan on Wednesday. [YONHAP]

Ulsan forward Lee Jong-ho scored one goal and set up another at Gudeok Stadium in Busan to help his club earn a victory in the home-and-away final series.

Busan midfielder Lee Seung-jun was able to score in the late second half, but it wasn’t enough to save the hosts from defeat.

The aggregate score will determine the FA Cup champions, with the away goals rule in effect. The second leg will be played at Munsu Football Stadium in Ulsan on Sunday.

The winner of this domestic cup competition will earn a spot at the Asian Football Confederation (AFC) Champions League next year.

Ulsan, which finished fourth in the first-tier K League Classic, broke the scoreless deadlock 20 minutes after kickoff. After receiving a pass from Lee Jong-ho, Kim Seung-joon fired a low shot from a narrow angle that went between the legs of Busan goalkeeper Koo Sang-min for a 1-0 lead.

Busan, which plays in the second-division K League Challenge, then replaced Han Ji-ho for Lee Seung-jun in the 36th minute, hoping to change the tide.

Busan, however, didn’t provide a stern test to Ulsan goalkeeper Kim Yong-dae throughout the first half as they only fired two shots, none of them on target.

Busan, chasing their first FA Cup title since 2004, in the second half deployed Brazilian forward Leo Mineiro, while Ulsan substituted off goal scorer Kim Seung-joon in the 54th minute to use Croatian attacker Mislav Orsic.

It was Ulsan that benefited most from the substitution as Orsic in the 57th minute delivered a fine pass to Lee Jong-ho to double their lead. Lee slotted into an empty net after weaving his way past the goalkeeper.

Busan was able to cut the deficit to one in the 85th minute. Romulo’s powerful left-footed strike was denied by Ulsan goalkeeper Kim Yong-dae, but Lee Seung-jun was on hand to tap home the rebound.

Busan, playing without national team striker Lee Jeong-hyeop, had a couple of chances to draw an equalizer in four minutes of second-half stoppage time, but both Leo and Romulo’s attempts were off target.